Thai Tourist Police Bureau officers have joined with their Taiwanese counterparts to crack down on a telecom fraud gang in Tainan, a city on Taiwan’s southwest coast and arrest 10 suspects, after Thai police discovered that more than 10 Bangkok retirees had been duped of about Bt1 million that was withdrawn in Taiwan.

Surachate said the bust stemmed from the Royal Thai Police’s call-centre scam suppression operation centre’s probe into the case, in which more than 10 civil servant retirees in Bangkok were duped into wiring a combined nearly Bt1 million to the gang, which then withdrew the cash in Taiwan.

This led Thai police to contact Taiwanese peers for help, and the Taiwanese spent three months technologically tracing the gang. The resulting was the arrest of 10 key suspects in the telecom fraud gang, along with 11 others who were hired to make cash withdrawal at ATMs, Surachate said.

Thai police also submitted to the Taiwan police the names of 29 Taiwanese suspects who were wanted in Thailand for separate telecom fraud cases, Surachate said, adding that Taiwan police are now hunting down those on the list.

As for the 18 Thais who were arrested during an October 2017 telecommunication fraud raid in central Taiwan for preying on people in Thailand, the Taiwanese CIB said they would be sent back to Thailand after their prosecution in Taiwan is completed. 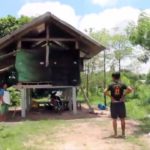 Four injured by lightning in Kalasin