The accident occurred while the workers were trying to install the wall on the third floor of a building under construction.

“As soon as I had unfastened slings connected to the precast wall, it fell from the third floor. Three workers in charge of installation also fell with it,” said crane controller Supak Chorrak, 61.

Nattawut Chorbsuk, 24, was crushed beneath the falling wall and died at the site.

The two other workers who suffered injuries were on the upper side of the precast wall when it fell, and were rushed to nearby hospitals.

One of them, however, later succumbed to his injuries.

Phuwadon Kongdee, a worker who witnessed the accident, blamed some of the knots around the concrete wall for failing to work properly, causing the fatal slip.

“Apparently, knots on one side of the precast wall did not work properly. They could not hold the wall and caused it to slip out and fall 6 metres,” he said.

Construction of the four-storey building is being carried out at the compound of Thai Merry Company Limited in Krathum Baen district.

The company has obtained proper permission to carry out the construction and an engineer from the local municipality has checked on the site every week, the Omnoi Municipality said.

However, due to the accident, construction work will be suspended until further notice.

Deputy Samut Sakhon Governor Piriya Chantadilok rushed to the scene after hearing of the fatal accident, while many other senior officials in the area also showed up.

“We will address three issues: help for the victims, checks on the building’s structure, and an investigation as to who should be held responsible for the accident,” Piriya said.

Krathum Baen police station will be in charge of the investigation, although no charges have yet been pressed because the cause of the accident must be determined first, he added.

The deputy governor also said that he planned to ask all parties involved to discuss humanitarian help that should be provided to the victims and their families. 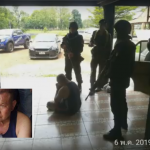