Southampton Face Off Against Bournemouth Still In Trouble And Looking Over Their Shoulders. The Cherries, Inconsistent, Could Drop The Saints Right In It! Team News. Manager Comments. Stats, And Prediction.

Shane Long got Southampton off to a seven-second flyer at Watford last Monday but they failed to put the game to bed and paid the price just before the end of normal time. Dropping points, from a winning position, is something Southampton have been guilty of all season and they are top of that Premier League table.

“If I thought we could not do this, I would not have taken the job.

In the moment I made the decision to do this job, it was clear I trust my team and that we can stay in the league. The way was a very difficult one, but we invested a lot, my staff and the team in this club, to leave this negative track we were in.

I think we have now the feeling that we are in a period where something is growing here and that is the most important thing for everybody working in this club, that we see that we started to go on a journey that is going in the right direction.”

“It’s important we don’t go into next season with any negative momentum so I think the way we finish this season will be hugely important.

We’ve usually finished the season very strongly and we’re keen to do that again.”

Southampton’s on-loan striker from Liverpool Danny Ings had a poor game against Newcastle and Sat out Monday night’s game with Watford. But, if he gets the chance against Bournemouth, he could be the difference between the two sides. 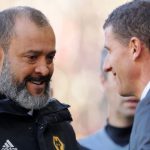