Plane Filmed: Looking out of an aeroplane window doesn’t usually provide the most entertaining of views.

Sure, you get a nice aerial view of the city in which you’re taking off and landing, but for the in-between bit – which, let’s face it, is 99.999 percent of the flight – it’s just fluffy clouds.

Well, unless you’re Tom Feehan. He captured this amazing video of a plane going past beneath his own – and you’ll never believe quite how quickly it was going.

Tom was on a flight between Vancouver and London, which contains around nine hours of nothingness between the bit where you see the skyline of Canada’s west coast and the bit where you get to see Big Ben from above.

At one point he was filming out the window – presumably, the film selection on his flight wasn’t up to scratch – and saw another plane heading in the other direction under his plane.

“I was coming back from Vancouver to London and just caught a glimpse of a plane zooming under the plane I was on and was amazed at the speed,” he later wrote online.

“It’s amazing, I love flying, you barely think you’re moving at all on your plane. I was thrilled how fast it went by.”

It is genuinely surprising, though when you think about it, it shouldn’t be.

Jumbo jets, or Boeing 747s at least, go at somewhere in the region of 950 kilometres per hour, so two of them passing each other in opposite directions don’t really share the same space for a very long time at all – even when you factor in the huge range of vision afforded to someone in a plane.

Aeroplanes tend not to go anywhere near each other in the air. A near miss is classified as when two planes come within 300 metres or so apart – but if everything is going well, then they’re usually as much as 15 nautical miles away from each other.

There are just 150 near misses per one million flights, most of which are in the run up to airports as planes wait to land.

They are usually totally without incident and do not so much as make the news, and there hasn’t been a mid-air collision between commerical flights anywhere in the world since 2015. 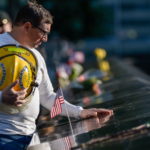