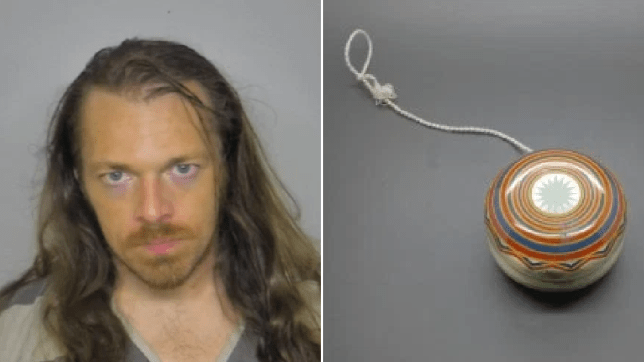 A man allegedly tried to strangle his girlfriend with a yo-yo string that he altered with the intention of severing her head.

Derek Dillman, 32, asked his girlfriend of two years, Michelle Kihlstrom, to drive him to a police station to turn himself in for outstanding warrants.

But Dillman apparently decided against surrendering to police in Bismarck, North Dakota, and became ‘agitated’, according to an affidavit obtained by Law & Crime.

‘Michelle stated as she was driving him to the police department, Derek continued to kick the dash and windshield of the vehicle as make threatening comments,’ the affidavit states.

‘Michelle stated Derek told her “I am going to fucking kill you” twice.’

Kihlstrom said she ran a red light ‘so she could get to the Police Department faster’ because she was afraid he would kill her.

Immediately after that, ‘Derek wrapped a Yoyo [sic] string around Michelle’s neck and cinched the string in an attempt to kill her as she was turning into the parking lot at the police department’, the affidavit states.

Kihlstrom told cops that Dillman ‘had modified this string to be used as a garotte [sic] as he believes the string can slice off a human head’.

The yo-yo string did not work as Dillman had planned. It snapped and Kihlstrom was able to get out of the vehicle and get to the police station.

‘Michelle suffered injury from the string and I observed marks going around her whole neck, consistent with a string or wire,’ Bismarck police Officer Casey Uhler wrote in the resulting domestic assault report.

Police department camera surveillance captured Dillman – whose warrants were related to fleeing cops and driving with a suspended license – leaving the parking lot in an unknown direction.

He was apprehended later that afternoon riding a mini bike that did not require a license or registration in the state.

He was also hit with another citation for driving with a suspended license. 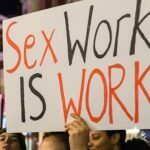 Sex workers need to be supported – not ignored