Wanted Criminals: Myanmar authorities conducted raids at entertainment venues, hotels, resorts and residential communities in the Lahu tribe-influenced area of Nayao, near the Thai-Myannar border opposite Chiang Rai’s Mae Fah Luang district on Sunday evening- and rounded up 81 Thai nationals who had illegally entered the country.

As the 81 are currently being detained for further questioning at Mong Hsat City Hall officials are trying to determine if any are wanted criminals.

They are especially keen to ascertain whether the group contains Thai drug trafficker Pannawit Pathum, 30, who is better known by his Facebook name “Theppabut Solo”, or 5-6 gang members.

Pannawit is thought to have fled to Myanmar after an arrest warrant was issued for him for allegedly masterminding the murder of a 17-year-old Khon Kaen youth on January 14 over an apparently unpaid drug debt. 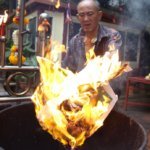