Shocking CCTV footage captured the moment a senior male worker attacked a female colleague with a one-minuite long beating – as others stood by.

Jessa Canete, 20, was sitting on the ground sorting goods at an oil factory in Davao, Philippines, when Ryan Ma, 36, approached her on November 25.

He hit her forehead with his phone, sparking an angry retaliation as Jessa stands up to confront him. The male worker then repeatedly punched Jessa before pinning her to the ground and kicking her in the head.

As several male colleagues stand watching, the attacker continues to punch and kick Jessa as she desperately struggles to fight back against the sturdily-built man.

Ma has since been arrested and charged with causing physical injury after the attack at 2.30pm in the Sasa district.

Jessa said she believes Ma was jealous of her and that the attack began when Ma asked her why her brother was not at work that day.

She said: ‘’He started talking to me, but I was in a hurry because I was at work. Maybe he got offended and he treated me violent kicks, punches, strikes. What did I do wrong?

”Is this the right way to ask why my brother is not at work? I don’t know why he is not at work. This man is too much! Because of what he did I suffered concussions and my head is swollen. He has already been dismissed from work because of this.”

The report said that Ma, a company driver, interrupted Canete and her colleagues’ conversation while they were busy putting items into boxes.

The suspect then ”stated lewd, profane and insulting words to the complainant which resulted to the heated argument between the two.”

It continued: ”Ma lost his temper and smashed his cellphone directly into the victim’s face, and indiscriminately beat and mauled her.”

Police Superintendent Tagum said: ”The case was already handled by Sasa Police Station wherein the suspect, Ryan Rebucas Ma is already in police custody and a case of physical injuries was already filed against him.’’ 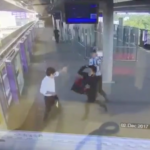