A plane carrying 138 Thai nationals from China’s Wuhan landed at a navy-run airport east of Bangkok on Tuesday night, upon which the passengers were immediately sent to a quarantine.

Although health minister Anutin Charnvirakul said none of the 138 passengers showed any sign of illness, Chinese authorities prevented two Thais from boarding the plane at Wuhan because they had high fever. Another Thai also could not leave because the person was discovered to have overstayed a visa.

Anutin said the Thai evacuation team had to respect decisions by the Chinese authorities.

The evacuees are now being quarantined inside a navy-operated hotel close to a naval base in Sattahip district of Chonburi province. They were to stay inside the facility for 14 days to monitor for any possible infection, the health minister said.

Thailand counted 25 cases of coronavirus infection so far, including 18 Chinese tourists and six Thai nationals, though no fatality has been reported. 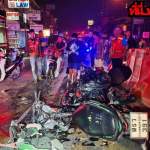 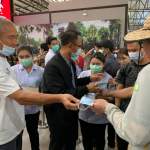 Mark KellyFebruary 18, 2020
Suvarnabhumi and Don Mueang airports have increased the intensity level of screening for passengers from...
END_OF_DOCUMENT_TOKEN_TO_BE_REPLACED