Home » Torrential rain is expected to the south.

Torrential rain is expected to the south.

The meteorological department on Sunday 24 September issued warnings to residents in Chumphon and eight provinces in the south down to deal with heavy rains, strong winds, and flash floods until Tuesday.

The Andaman Sea and the upper Gulf of Thailand will experience strong wind and waves as high as three meters during the period and boatmen, especially small boats, were told to exercise great caution if they decide to venture out to the sea.

The Weatherman also said that lower parts of the North and Northeast, central and eastern regions as well as Bangkok Metropolis and peripherals will face intense rain and heavy rain in some parts from today until tomorrow as a result of the monsoon trough as it moves through the lower central region and the eastern region.  Thai PBS 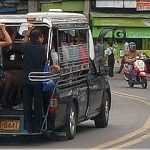 The driver tries to escape from the crowd after a truck killed a woman.