Sawang Boriboon rescue foundation needed to mount a three hour operation on foot to reach a foreign off-road biker who had become sick on a hillside.

He was with two friends who were unable to help him after he fell unconscious. They alerted the authorities.

The incident happened on an area near the border of Chonburi and Rayong near Khao Wai in the Song Phee Nong Hill area.

When the rescue team arrived they found the man unconscious.

He appeared to have had a stroke of some kind and was carried down the hill.

The rescue was not completed until about 11 pm when the man was taken to hospital.

No names, nationalities or condition of the victim was provided in the Sanook report 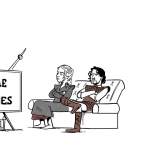 Game of Thrones Recap | Before season 8 (in 3 minutes)