Traders on Koh Si Chang off the Chonburi coast have appealed to tourists to return to the holiday island.

They have said that the bad guy – Ai Korn – is gone and there is nothing to fear.

Following the appalling crime, in which the victim was raped, hit in the face with a rock, dragged half alive for 50 meters then bludgeoned to death and hidden under rocks and bracken on a hillside, there was only a trickle of tourists yesterday.

In custody and having admitted to committing the crime while high on amphetamines is Ronakorn, 23 – now dubbed in the Thai media as “Ai Korn”. He came from the Tha Thewawong area of the island where Thai Rath interviewed traders yesterday.

Rattiya Sangthong, 37, who runs a restaurant said that following the incident all the tourists upped and left en masse. “The bad guy has gone,” she said, “Only the good guys are left”.

She said that in all her 37 years there had never been a murder of this nature on her island. In a message directed at tourists she begged:

Patcharee Thongpheng, 49, said: “It was a terrible crime. Since it happened I have been taking greater measures for my own personal protection.

Despite the fact that this was a one off, opportunistic crime she added:

“We are moving around in groups”. 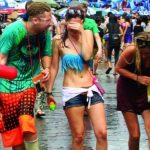 Pattaya hotel bookings way down as tourists stay away