Two unemployed women were arrested early on Tuesday for allegedly robbing a beauty salon owner in Samut Prakan province before making off with gold ornaments and cash worth about Bt46,000.

The two suspects were arrested at 3am in their rented room about 200 metres from the beauty salon in Phra Samut Chedi district where Walapat Chakhamnan, 49, was found dead late Monday night.

The two suspects were identified as Siwaporn Jaisuk, 31 and Ae, 17. Siwaporn is a resident of Samut Prakan’s Muang district while Ae is from Kalasin.

Police checked footage from security cameras around the shop and saw the two were the last people to leave the shop before Walapat was found dead by her neighbour. Police traced and arrested the two suspects at their rented room.

Police found Bt6,000 in cash, a gold necklace and a gold bracelet –each weighing about 15.16 grams – on the two suspects.

The two told police they had robbed the beauty shop owner because they were out of job. They said they pretended to be clients when they walked into the shop, said police.

They said they raised their hands to give a wai to the shop owner before grabbing her hair and pulling her to the back of the shop. Seeing a knife in the shop, one of them stabbed the shopkeeper several times and slit her throat before they fled with the cash and gold ornaments. 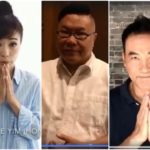