Home » Thai woman burns her own car “respecting” it 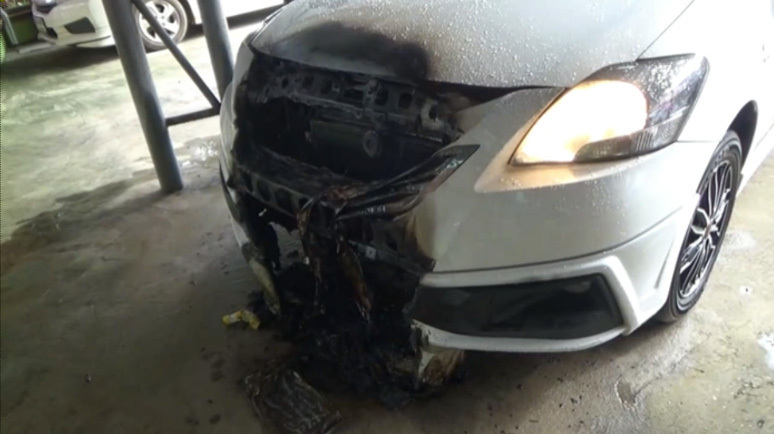 Thai woman burns her own car “respecting” it

A Thai woman in Kamphaeng Phet province just lost the front part of her Toyota in a fire yesterday after she lit incense sticks inside to pay respect to the “goddess” living inside her car.

On the occasion of the Buddhist Ghost Festival yesterday, in which Thais of Chinese descent pay respect to their ancestors, Janjira Tuangyu, 24, decided to light incense sticks to honor her Toyota Vios’ goddess and insert them into the tiny space between the vehicle and the license plate.

After the ceremony, she went back inside her apartment to take a shower, but she heard the building’s maid screaming after she found the car in flames.

Lucky for the woman, a local gardener was on hand to put out the fire before the damage spread even further. As you can see from the pics, he managed to save most of the car, with only the front end being damaged.

Local police were notified about the incident and were on the scene looking at basic bits of evidence. It is not expected that any charges will be filed as they feel the woman has already had enough problems for that day.

Many Thai people believe that their cars have a goddess protecting them. Therefore, Thais often bestow these goddess with flower garlands, commonly placed on top of the console or hung from the rear-view mirror.

You surely must of noticed the flower sellers, often situated at busy junctions and intersections. They are becoming more well known recently too, with some of them dressing up, most notably, one who dressed up as Spiderman and ended up saving a motorcyclist after being hit by a car.