Officers assigned to track the whereabouts of Yingluck Shinawatra are using the same methods employed in the bomb attack on Phramongkutklao Hospital in May, Deputy Prime Minister and Defence Minister Prawit Wongsuwan said yesterday.

Officers took about three weeks to discover that 62-year-old Wattana Poomaret had planted a pipe bomb in a vase decorating a VIP room located on the first floor of the hospital.

Prawit refused to elaborate further on progress in the Yingluck case, saying that authorities would need time to connect CCTV footage from various sources to figure out what had happened.

Authorities are becoming more convinced that Yingluck has fled the country as evidence is gathered from various CCTV cameras.

Yingluck has not been seen since failing to appear at a verdict reading in the case related to her government’s rice-pledging scheme on August 25.

The court set a second date of September 27 to read the verdict in the case in which the ex-premier faces a possible 10-year jail term if convicted of criminal negligence related to her government’s rice-pledging scheme.

Thai authorities have contacted more than 190 countries via Interpol but none has offered any clues as to Yingluck’s possible whereabouts, Prawit said.

Deputy police chief Pol General Srivara Rangsibrahmanakul said the investigation was 80-per-cent complete and the information found by police matched with the military’s.

However, it should be the military that files a complaint with police over her flight and officials also needed to consider if such an action might have implication on relations with neighbouring countries, he added.

Initial reports suggested Yingluck fled Thailand to Cambodia before flying via Singapore to Dubai where her brother Thaksin, who lives in self-exile, has a home.

Prawit is due to attend a bilateral joint Cabinet meeting in Cambodia tomorrow but he said it was still to be decided whether Thai authorities would ask for assistance from Phnom Penh regarding Yingluck’s possible escape route. 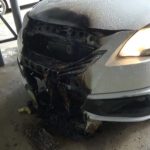 Thai woman burns her own car “respecting” it