They were rounded up during a simultaneous raid at two locations: Jalan Subok and Kampong Kianggeh. 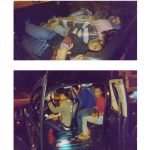 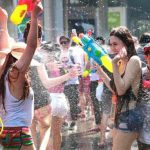