Home » Concrete falls from Ari BTS Station, luckily no one was harmed 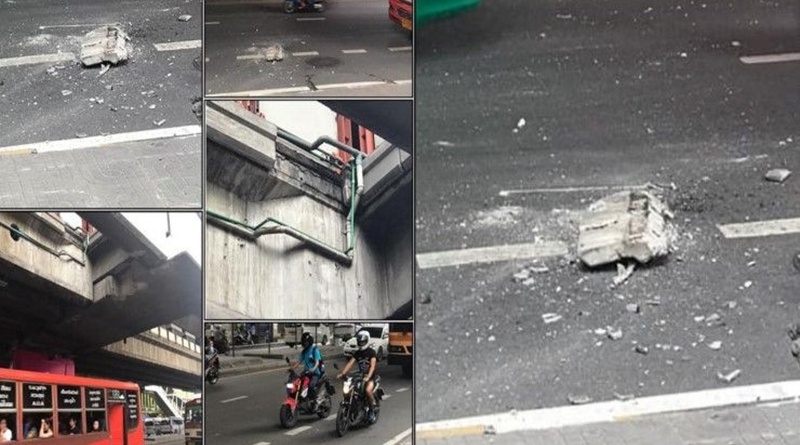 Concrete falls from Ari BTS Station, luckily no one was harmed

A Facebook User named Isara Ariyachaipanich shared an extremely dangerous incident that took place on the 10th of this month at one of the Sky Train Stations in Bangkok.

A piece of concrete broke off of the BTS Station and fell down onto the road below. The concrete fell off in front of a bus that was only meters away. Fortunately, at the time there was no car and no person standing underneath.

There was damaged concrete on the overhead pedestrian walkway at the Ari BTS Station that was breaking down. The damage was left unfixed and finally, the piece of concrete that was hanging fell off and dropped down onto the road.

A good citizen later went on the road and removed the concrete in fear of a car driving into the fallen piece of concrete.

case is a good example of why regular checkups of sky trains and pedestrian walkways are so important. They are placed on top of roads and the ground where cars and other people can be walking through at any time of the day and night.

Especially in Thailand’s rainy season when there are more wind and water than usual. Although major constructions like this usually have insurance, money can never replace the value of a life lost.

Isara stated in the post “It fell down from the Ari BTS Station. Lucky no one was harmed, a bus driver moved the concrete to a safe spot by the road. I already reported the incident to BTS on Facebook, if it dropped on a car or on someone they would likely have died.”.

Isara sent some photos to the BTS Page on Facebook where the admin of the page stated that they would investigate on the issue.

Sad, 50-year-old man who jumped to his death – Video