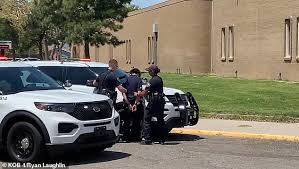 At least one student was reportedly left dead after another student allegedly opened fire at Washington Middle School in Albuquerque, New Mexico.

The shooting broke out around 12.45pm on Friday. A young man was seen apprehended by Albuquerque cops in handcuffs outside the school.

The suspect’s identity and age were not immediately known.

Police officials during a press conference called it an ‘isolated shooting between two male students’.

‘The student who fired the weapon is on our custody right now, pending an investigation,’ an official said, according to the Daily Mail. ‘The student who was shot has unfortunately passed away.’

A police officer at the scene ‘was immediately able to rush over, deescalate the situation and take the suspect into custody on scene’, the official said. The safety of other students was secured by school staff and district resource officers.

Authorities said they do not think there are other victims or suspects.

In a tweet earlier on Friday, Albuquerque Public Schools (APS) said the campus was ordered to ‘shelter in place due to police activity in the area’.

The middle school was deemed secure around 4 pm.

‘Due to the ongoing investigation, we are asking that parents pick up their children as soon as they can,’ the school district tweeted.

‘I send out my thoughts and prayers to all of our students – to all of our families that are impacted by this horrible event,’ Elder said.

Classes at the middle school have been canceled for Monday, but staff will be on site working with counselors to ease the students back onto campus, Elder said.

A student allegedly threatened to bring a gun to school during a fight on Thursday, some parents told KOB.

An eighth grader who identified himself as Amari told the news outlet that the student who was shot was his friend.

‘There’s two twins who got held down and beat up, which is my friend I live next to them,’ Amari said. 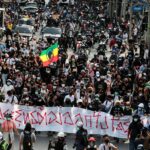 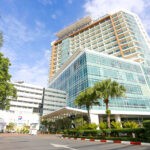