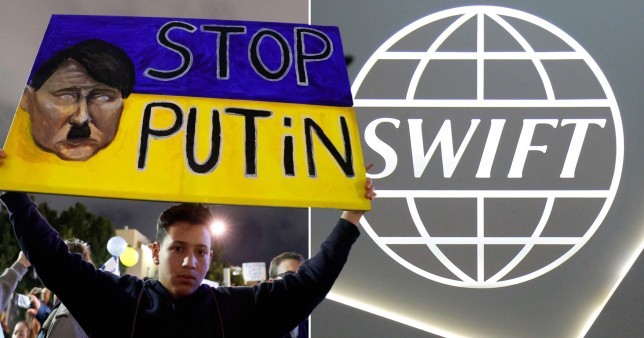 Western powers have agreed to cut Russia from the main international banking system in a significant ratcheting up of sanctions.

The UK, US and EU have reached a deal to exclude several Russian banks from Swift, a global payments system.

The measure was announced as Ukraine’s capital city Kyiv faced a fourth night of air strikes after Vladimir Putin finally ordered his troops to invade.

She said Western allies are committed to imposing ‘massive costs’ on Russia to ‘cripple Putin’s ability to finance his war machine’.

Swift connects thousands of financial institutions around the world.

Cutting Russia off from the system was seen as one of the toughest sanctions the West could impose. But it will also involve pain for foreign banks and other creditors that do business with the country.

On Saturday Germany – a key hold-out – considerably softened its position and said they would back the ban, paving the way for a deal to be reached.

Ms von der Leyen said she will now propose to EU leaders that a ‘certain number’ of Russian banks are removed from Swift – something that will stop them from conducting most of their financial transactions worldwide and effectively block Russian imports and exports.

‘As Russian forces unleash their assault on Kyiv and other Ukrainian cities, we are resolved to continue imposing costs on Russia that will further isolate Russia from the international financial system and our economies,’ they say.

‘This will ensure that these banks are disconnected from the international financial system and harm their ability to operate globally.’

The deal comes after Prime Minister Boris Johnson said there were some ‘very grim days ahead for Ukraine’ and warned that ‘much tougher’ economic punishments to stop Russia were needed.

The UK has been calling for Russia’s exclusion from Swift for days, but other nations were reluctant due to the harm it will cause to companies that that supply goods to and buy from Russia.

Boris Johnson spoke to Ukraine’s President Volodymyr Zelensky on the phone on Saturday to discuss the international community’s next steps to Russia’s invasion.

Downing Street said the prime minister ‘paid tribute to the incredible heroism and bravery’ of the Ukrainian people and its leader, who have put up a fierce fight since Moscow’s invasion four days ago.

A spokeswoman for the PM said the two leaders ‘agreed that President Putin is being met with a greater Ukrainian resistance than he calculated on’.

The pair were also said to have ‘agreed on the need for the international community to isolate Russia completely diplomatically and financially’ – including banning it from Swift.

After the call, Zelensky tweeted his thanks to the UK and said he had agreed ‘the next steps’ to tackle Russia’s aggression with Britain.

‘Grateful to the British Prime Minister for his position, new decisions to enhance the combat capabilities of the Ukrainian army. Agreed on further joint steps to counter the aggressor,’ Mr Zelensky said.

Countries around the world are ramping up their support for Ukraine as it braces for a fourth night of air strikes.

Germany, France and the Netherlands all announced new shipments of weapons on Saturday.

Britain has already pledged to continue to supply arms to Ukraine’s embattled forces.

So far 2,000 anti-tank missile launchers have already been sent and armed forces minister James Heappey said the Ministry of Defence is working on plans to support a resistance movement and a government in exile if Ukraine was finally overran.

Western intelligence officials believe Putin wants to overthrow Ukraine’s democratically elected government and install his own puppet leadership in a bid to wind back the clock to the Soviet era.

Yesterday, Boris Johnson accused the Russian leader of being a bent on a ‘revanchist mission to overturn the post-Cold War order’.

He made the comments as he joined the US and EU in ordering personal sanctions against against Putin and and his foreign minister Sergei Lavrov.

However, the government has faced criticism that is has still not gone far enough.

Chelsea ‘could go bust’ if Roman Abramovich is sanctioned 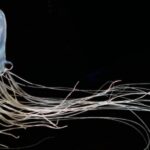