Home » Music festival Wonderfruit to return to Pattaya in December

Back to the field once again Wonderfruit, a cross-cultural music festival that incorporates arts, inspiring talks, crafts, and culinary delights, is set to return to Pattaya on December 14-17.

Describing itself as the place “where barefoot luxury meets awe-inspiring architecture and natural adventure” (maybe because of a mix of wealthy Thai attendees in luxury bohemian dresses and barefoot Western hippies often attend), this year’s Wonderfruit is led by veteran techno DJ Richie Hawtin from Canada and British hip-hop artist Roots Manuva.

Other than that, Khruangbin, a band of three Americans playing Thai Molam-inspired sounds, will probably create a reaction from the local crowd. Other confirmed acts are Brazilian house DJ Gui Boratto, Izzy Bizu, and Nicola Cruz.

On the food stands to front, Morimoto Bangkok will be serving their Iron-Chef quality sushi while Straight Outta Thonglor will keep the drinks flowing throughout. Thai street food will also be available, so you will be sure to get your Pad Thai fix.

Between the performances, another highlight of Wonderfruit is the art installations across the location. This year’s artwork includes a biomorphic alien creation by Filipino artist-designer Leeroy New and an interactive sculptural representation of Punyisa Silparassamee’s childhood Chinese dragon festival toy, while the California-based multidisciplinary artist, Tigre Bailando, creates a sanctuary of discovery and healing.

Wonderfruit takes place from Dec. 14-17 in The Fields at Siam Country Club, about two hours from Bangkok. Day passes for adults are up for grabs on Event Pop, starting from THB4,000. Children can enter for free. Coconuts Bangkok 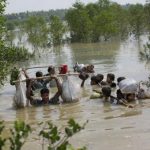 Rohingya refugees have fled Myanmar up to 123,000