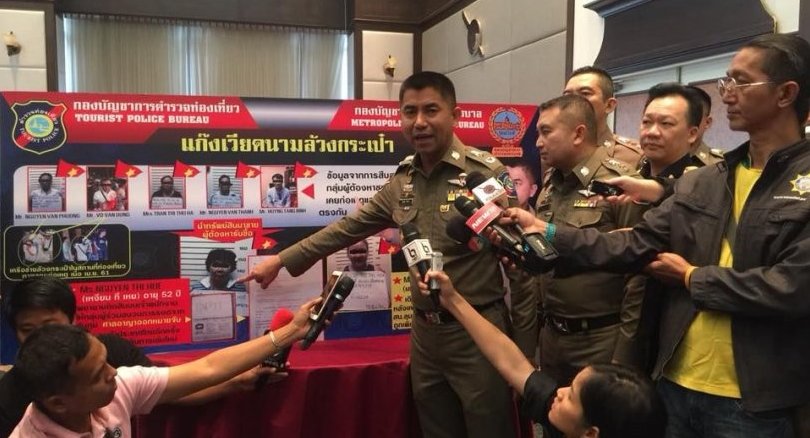 Many of the 17 suspects of a Vietnamese pick-pocket gang arrested last week in Bangkok’s Din Daeng district were carrying counterfeit passports and using fake names and had stayed in Thailand for 30 years, and another three were found to have overstayed their visas, the Tourist Police Bureau told a press conference on Friday.

Surachate was reporting on progress in the case involving the arrest last week of suspected gang leader Nguyen Thi Hei, 52, and another female gang member age 34, and the subsequent round-up of 15 Vietnamese nationals at a Din Daeng flat who are accused of being linked to the two female suspects.

He said the gang members were apparently well-trained in stealing from people in a crowd. They would steal around Bt10,000 worth of other people’s valuables and then bring them home to sell in their home country.

Some gang members had been previously arrested and deported, but had changed their names and passports before re-entering Thailand to continue their crime spree, he said.

Surachate endorsed plans by the Immigration Police Bureau to install biometric identification systems at all entry points to Thailand. The systems could include fingerprinting, iris scanning and facial recognition and would be a big help for preventing these kinds of crimes, he said.

He added that the Thai owner of the Din Daeng flat where the Vietnamese people were found would be charged for failing to report within 24 hours the presence of foreigners staying at the premises, as is required under Immigration Bureau regulations.