It was a pithy summary of Steven Spielberg’s landmark monster movie and the series it launched that left audiences gasping in wonder as they handed over a dino-sized $3.8 billion for tickets over four films.

“Jurassic World: Fallen Kingdom” — the fifth episode — comes to the US having already opened in 48 territories, shooting to the top spot in each, breaking several records and grossing $151 million.

“It’s wonderful that it’s still popular and not yet extinct,” Spielberg, an executive producer on “Fallen Kingdom,” said at its Los Angeles premiere on Tuesday.

He praised the imagination and creativity of Michael Crichton, the late author of the novels, and revealed that he thought of the “Jurassic” series as part of his family.

“It’s kind of like being a birth parent, and you give your kid up for adoption but you’re really proud of the adoptive parents for doing a great job with your original idea,” he said.

China will be running for its life from T. rex this weekend, where experts are predicting a $100 million-plus debut, followed by Latin America and North America on June 22.

The latest foray among the Cretacious critters of Isla Nublar — T. rex and the velociraptor are far too young to be considered Jurassic-period animals — involves the high-octane action that audiences have come to expect, including all manner of terrifying therapods and oversized marine predators.

“If the rest of the world is any indication, I think people are really loving it and are really going to go out and see it, which is fantastic. It means we can probably do another one.”

Directed by J.A. Bayona (“A Monster Calls”) and co-written by Colin Trevorrow, who helmed “Jurassic World,” the movie opens three years after the theme park was abandoned, with the dinosaurs roaming freely.

Goldblum briefly reprises his role as Ian Malcolm, the grumpy but perspicacious chaos mathematician from the first and second films, to make his case for letting the big, scary lizards die off.

But Claire Dearing (Bryce Dallas Howard) has been transformed from the frosty, corporate stuffed suit introduced in the last movie into a bleeding heart animal rights activist — and she has other ideas.

Howard’s stilettos sparked a backlash to “Jurassic World,” mainly because it was seen as absurd, if not a little sexist, to have the female lead continually running for her life in vertiginous heels.

In a move interpreted as the franchise thumbing its nose at the critics, Howard is still wearing six-inch pumps as she drives to old flame Owen’s lakeside cabin to talk him into joining her on a mission to round-up and rescue the dinosaurs.

“We hope to just honor the legacy that Michael Crichton and Steven Spielberg began with ‘Jurassic Park’ 25 years ago. The fact that people liked ‘Jurassic World’ and also that we got to do another movie, that’s incredible,” Howard said.

“My son is 11 and when I saw ‘Jurassic Park’ for the first time I was 12. That means so much to me that he’s going to go to the theater and watch this movie opening weekend with his friends.”

A sixth film, tentatively titled “Jurassic World 3,” is scheduled for release on June 11, 2021 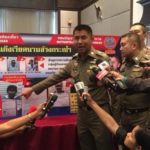