Romantic’ Gifts: Another warning has been issued about fraudsters using a “romance scam” to prey on more than 100 victims and extracting around Bt69 million.

At a ceremony at the police headquarters in Bangkok, a retrieved Bt85,200 was handed back to an unnamed victim from Samut Sakhon’s Ban Phraew district who had been duped into sending Bt155,200 to a fraudster

The Anti-Money Laundering Office (Amlo)’s Legal Affairs Division chief Peerapat Ingpongpan warned that the scammer, claiming to be a good-looking, wealthy foreigner feigning romantic intentions via a dating website or Facebook, would ask the victim to wire money to clear customs or a logistics company’s procedure for an expensive gift that was being sent.

He said the Amlo hotline on 1710, set up in June, reported that 104 people had been duped out of a total of Bt69 million.

Deputy tourist police chief Surachate Hakparn said that Nigerian fraudsters were reportedly the first to use this online romance scam tactic and the police had seized almost Bt2 million to return to eight victims.

He said nine victims who had received more than Bt2 million were among the plaintiffs who filed police complaints in 107 romance scam cases that claimed damages worth Bt72 million.

Surachate said the separate “call-centre” scams had involved work with counterparts in eight countries to arrest 160 Thai and foreign suspects.

He cited the recent arrest of 16 Thais in the Philippines, 10 of whom had already been sent to face prosecution in Thailand while the other six were waiting for documents to be cleared and should be sent to Thailand in two weeks.

The call centres kept moving their operations, causing the police to chase of them in eight countries, resulting in the arrest of 109 Thais and 55 Taiwanese citizens to face the charges of colluding in fraud and colluding in a transnational criminal syndicate, he said. 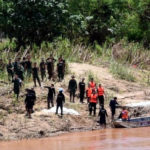