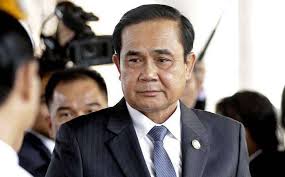 Prime Minister Prayut Chan-o-cha has asked the public for patience amid high living costs, including rising fuel prices, saying the government is doing its best to improve the situation.

He was speaking as he led senior officials to inspect a project set up to address water shortages in Kanchanaburi and met residents to listen to their economic grievances.

During the visit, a villager asked him about the impact of rising fuel costs and the prime minister admitted it is a problem.

“I don’t want to make any excuses, but we have to consider where the problem comes from,” he said. “Fuel is controlled by global prices.”

“All the government can do now is seek funds to subsidise fuel costs at 40-45 baht [per litre],” he said.

“Previously, we tried to maintain the cap [on the diesel price] at 35 baht a litre for as long as we could,” he said.

“The current situation is not normal as the [Russia-Ukraine] war continues like this,” he added.

Responding to villagers’ complaints about the rising prices of consumer goods, Gen Prayut said he sympathised with them.

However, he appealed for understanding from the villagers, saying the government is caught between issues surrounding manufacturers and consumers.

The Commerce Ministry has maintained a cap on the prices of more than 100 items, causing frustration among producers struggling to deal with rising production costs, he said.

“If we put too much pressure on them, manufacturers will be forced to close their plants. We rely on each other. We only need to ensure fair prices,” he said.

“To be honest, I am not trying to please businesses. There is a regulatory committee to ensure fairness.

If we pressure them too much … workers will be affected,” he said.

“I am not blaming anyone, but we have to see ourselves as a family and find ways to look after each other,” he said.

“Things will improve, and this also depends on how we live our lives. Right now, we are falling on hard times. Please be patient,” he said.

“I also have to be patient myself. I don’t spend lavishly, and I eat as normal people do.

“As a prime minister, I cannot indulge in leisurely travel.

“I’m not complaining but I am telling you that being a prime minister is not easy.”

During the inspection, Gen Prayut congratulated locals for the royally-initiated groundwater project aimed at addressing water shortages during the dry season in Kanchanaburi’s Huay Krachao district.

He also instructed local officials to ensure that groundwater is fairly distributed to residents, and urged them to prepare for floods in the upcoming months.

Gen Prayut then visited and paid his respects to the statue of King Naresuan the Great in tambon Don Chedi in Phanom Thuan district.

There, Gen Prayut had his photo taken with students as they asked the prime minister to sign the T-shirts they brought.

In the afternoon, the prime minister inspected the progress made on the new skywalk construction project in Muang Kanchanaburi district.

Despite numerous construction delays, the new skywalk is set to open sometime early next year, according to provincial governor Jirakiat Bhumisawasdi.

Located in the city’s old town district, the 130-metre skywalk — which is suspended 15m above the ground — will offer magnificent views of the confluence of the Khwae Yai, Khwae Noi and Mae Klong rivers.

It is hoped the bridge will boost the province’s tourism income by attracting more visitors.

As the first phase of the skywalk’s construction is almost complete, and the contracts for the second and last phases have been signed, Mr Jirakiat said, adding that the skywalk will be ready sometime early next year.

The work was delayed repeatedly by the spread of Covid-19, so the government agreed to extend the deadline for the contractor, he said. 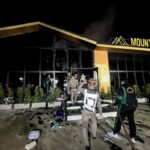 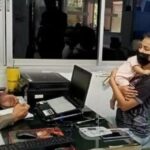