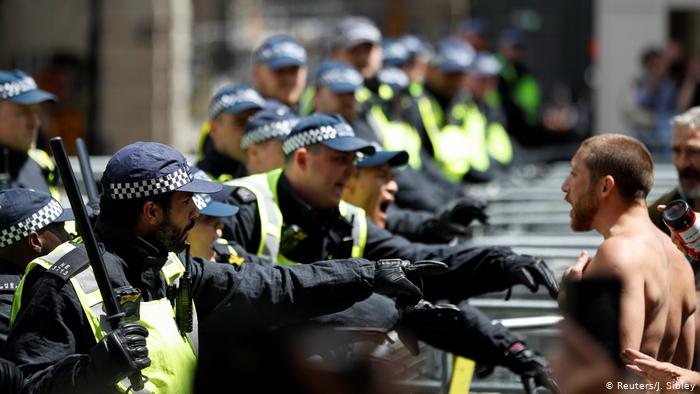 Police in London arrested over 100 people on Saturday after far-right protesters, some brandishing neo-Nazi regalia, clashed with officers who tried to separate them from anti-racism demonstrators.

Six officers are said to have suffered minor injuries.

Racist thuggery has no place on our streets. Anyone attacking the police will be met with full force of the law. These marches & protests have been subverted by violence and breach current guidelines. Racism has no part in the UK and we must work together to make that a reality.

Prime Minister Boris Johnson reacted on Twitter, saying  “racist thuggery has no place on our streets” and that “anybody attacking the police would be met with [the] full force of the law”.

There were scuffles earlier in the day in the UK capital, where far-right groups had traveled, saying they wanted to “defend” statues and memorials.

Extreme right-wing protesters, some brandishing neo-Nazi regalia, clashed with police as officers tried to separate them from anti-racism demonstrators.

Police had designated separate zones in central London for the two factions and ordered all protests to end by 5 p.m. (1600 GMT), in a bid to avoid clashes between the groups.

At about the time of the curfew, fights broke out between rival groups and police outside London’s Waterloo railway station. The news agency Reuters reported that missiles and fireworks were thrown.

In preparation for the demonstration, statues of wartime Prime Minister Winston Churchill and the Cenotaph war memorial were both boarded up in a bid to avoid them becoming flashpoints for violence. Both monuments had been vandalized the previous week.

STATEMENT RE: Friday and Saturday's protests.

Please note that we are not condemning any protestors who go to central on Saturday and will continue to send aid and resources where possible. 🙏🏿✊🏿 pic.twitter.com/SUP8DmWm8X

Authorities also fenced off other statues in Parliament Square, including memorials to Nelson Mandela and Abraham Lincoln.

The Black Lives Matter group in London had earlier called off its official demonstration planned for Saturday over concerns over safety and planning.

Recent anti-racism and Black Lives Matter protests around the world have protesters target statues that some claim serve to glorify imperialist and racist episodes of history.

Metropolitan Police Commander Bas Javid said he understood “why people want to make their voices heard – there is a really strong depth of feeling out in the black communities.”

Protesters turned out in other major cities around the world on Saturday as part of the Black Lives Matter movement and to demonstrate against police brutality and racism.

In Paris, where thousands gathered for a demonstration against racism and police violence, officers fired tear gas.

The protests were the latest to be sparked by the death of African-American man George Floyd, after a Minneapolis police officer knelt on his neck for nearly nine minutes.

In cities around Australia, people marched in support of the Black Lives Matter and indigenous rights movements.

STATEMENT RE: Friday and Saturday's protests.

Please note that we are not condemning any protestors who go to central on Saturday and will continue to send aid and resources where possible. 🙏🏿✊🏿 pic.twitter.com/SUP8DmWm8X

The biggest demonstration took place in Perth, the Western Australia state capital, where the Australian Broadcasting Corporation estimated that 5,000 people gathered, despite the lack of a city council permit.

Around 1,000 protesters gathered in City Park in Darwin – capital of Australia’s Northern Territory.

It has the highest proportion of Aboriginal people of all the nation’s state capitals.

“They told us not to come. They told us to be silent. We will not be silent,” said Hannah McGlade, a human rights lawyer and activist, who is calling for an independent investigation into indigenous deaths in custody.

Taiwan’s Black Lives Matter rally also had an indigenous twist. Around 500 people packed into central Taipei in a show of solidarity for George Floyd and to listen to indigenous Taiwanese people – who make up  3% of the island’s population – discuss discrimination such as landlords refusing to rent property to them. 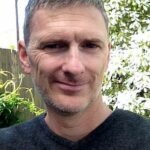 How Australian actor on death row in China fell head over heels for a Thai woman and went ‘into business’ with her before he was busted with 7.5kg of ice in his luggage 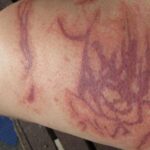