A truly horrifying video has emerged showing the devastating effects of the wildfires raging through California.

Brynn Chatfield posted the video on Facebook of him driving through him hometown while evacuating the fires, which have killed at least five people so far.

In the video you see the vision is poor out the front of the car as smoke and ash engulfs the view and to each side of the road fire burns through nearby trees.

In the distressing footage, a passenger in the car can be heard saying a payer for the evacuees to get to safety.

Brynn posted the video along with comment: “I feel very vulnerable posting this but I feel I should. My hometown of Paradise is on fire. My family is evacuated and safe. Not all my friends are safe. It’s very surreal. Things always work out, but the unknown is a little scary.”

According to the California Department of Forestry and Fire Protection the fire – which they believe started on Thursday morning in Feather River Canyon – has spread rapidly forcing communities to evacuate from their homes.

Over 70,000 acres of land has been ravaged by the fire and fire departments have only been able to contain five percent of this.

So far, 2,289 fire personnel have been at scene attempting to tackle the blaze with 303 fire engines, 59 fire crews, 11 helicopters, 24 dozers and 11 water tenders, according to California Fire Department. 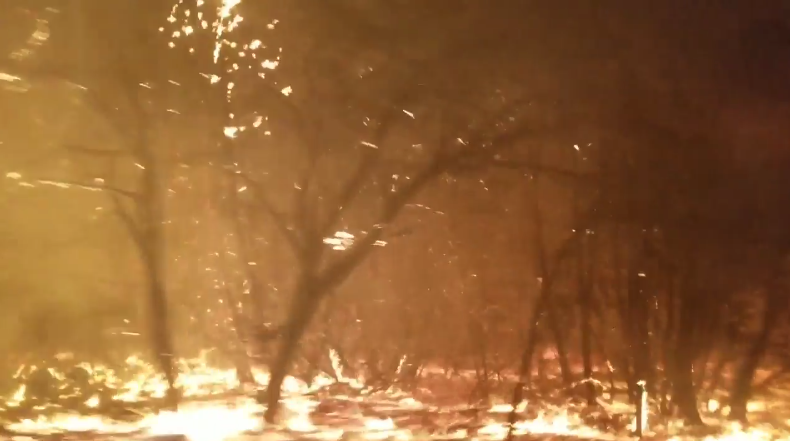 The fires are believed to have started due to intense winds, low humidity and very dry vegetation. Much of California has had less than five percent of their normal rainfall over the last month.

California governor-elect, Gavin Newsom, has issued an emergency warning for the LA and Ventura counties after the Hill and Woolsey fires destroyed homes and forced around 105,000 people to evacuate and seek refuge elsewhere.

Of the three raging fires the largest is Camp Fire which burned 20,000 acres in less than 14 hours on Thursday. It’s reported to be currently five times the size of Manhattan. The fire grew by 10,000 acres in only 90 minutes – meaning it grew an average of more than one football field every second during those 90 minutes.

Man Gets Caught By ‘Son’ Checking Out Emily Ratajkowski