Speaking on his first day in office, Pipat Ratchakitprakan, a key Bhumjaithai Party leader, said he wants to include marijuana in medical tourism, especially Thai traditional medicine and massage.

“We would like to provide medical tour packages, such as detox, Thai massage and other wellness courses that use marijuana substances,” said Mr Pipat.

The marijuana tourism packages would aim to attract tourists from Europe and the US who have a positive perception about medical marijuana.

Bhumjaithai’s campaign promises included the liberalisation of marijuana cultivation for medicinal purposes as well as the legalisation of ride-hailing and home-sharing apps and sites.

Presently these services operate here, with the market dominated by Grab and Airbnb.

The party’s policies were presented to the prime minister, with the Tourism and Sports Ministry expected to work with the Transport Ministry to legalise ride-sharing services.

Many public transport services are seen as costly and do not reach some tourism areas.

The prime minister expressed his concern after a recent case in which a minivan charged Australian tourists in Phuket 3,000 baht to travel from the airport to Kata beach, said Mr Pipat.

“In order to tackle these kinds of problems, the Tourism Ministry must cooperate with the police and the Transport Ministry to get rid of scams and legalise ride-sharing as soon as possible to help tourists,” he said.

Mr Pipat admitted that some transport services are awful and improving them is an urgent task that will require more compliance from other authorities after little has been done the past four years.

The interim government had full enforcement power, but with the Transport Ministry also under Bhumjaithai control, he expects more frequent discussions to resolve these problems together.

Mr Pipat said the party will push the government to recognise accommodation sharing as a legitimate business in Thailand.

Operators such as Airbnb can help monitor the services and be a trusted agent between house owners and guests.

Homestays are another choice that can help generate revenue in remote communities, aligning the core concepts of tourism promotion in all 77 provinces in Thailand.

However, the details of legalising accommodation sharing will be discussed in later stages after meetings with the private sector to hear their needs.

He said some good policies from the previous administration will be kept such as improving safety standards at tourism attractions to regain the confidence of foreign tourists. Mr Pipat set this as his priority task.

He would like to schedule a talk with the Finance Ministry and the Bank of Thailand about easing the strong baht, which has made Thailand more expensive for foreigner travellers in recent months.

In addition, extending the visa-on-arrival fee waivers will be considered right after the prime minister delivers his policy statement to the House.

In terms of sports, Mr Pipat will encourage more operators of international tournaments to choose Thailand as a destination as the events will not only attract tourists to the games, but also promote Thai tourism.

Yuthasak Supasorn, governor of the Tourism Authority of Thailand, said the agency is ready to implement medical marijuana tourism promotion to build quality tourism because the target segment tends to spend more than average tourists 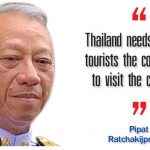 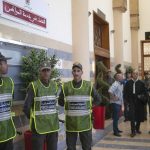