Motor Racing: For all those thousands of women out there who want to race in F1, some idiots have come up with the W Series, just for women. The new all-female racing series, the W Series, was launched in October, supported by former Grand Prix driver David Coulthard and top designer Adrian Newey, with the stated aim of helping women racers get to Formula One.

No woman has competed in Formula One since 1976 but organizers of the W Series hope to provide a platform for them to develop skills before taking on the men further up the motorsport ladder.

With a planned start in May 2019, the series will offer free entries to the world’s best female racers who will be together in F3-spec Tatuus cars. A prize fund of 1.5 million US dollars has been allocated to nearly 20 competitors who will be selected purely on merit after tests and appraisals, with the overall winner collecting 500,000 US dollars. Currently the best female race driver is Danica Patrick racing in the US.

Organizers said they aimed to stage six 30-minute races at top circuits in Europe, most of which were past Formula One venues, with the identical 1.8 liter Formula Three cars.

“At the heart of W Series’ DNA is the firm belief that women can compete equally with men in motorsport. However, an all-female series is essential in order to force greater female participation,” organizers said in a statement.

Coulthard, winner of 13 Grand Prix between 1995 and 2003, is on the advisory board along with Red Bull’s technical head Newey and both will be involved in the driver training program.

However, female competitors are nothing new and in fact, the Oran Park circuit in Australia used to have women only races, called the Powder Puff Derbys. This did not however produce a women only ladder to the top echelons of motor sport. The number of entrants was around half a dozen only.

These shrieks for “equality” and PC go contrary to normal physiology and psychology as well as anatomy. The physical effort needed to drive an F1 car requires strength as well as fitness. (And yes, I have driven one and also many other categories of race cars, so I do know what I am talking about here.)

And what will the W Series do about Lady-Boys? Perhaps a special category for them? Should the FIA institute chromosome testing for all drivers?

Really, it is all so silly. If the pits are full of women wanting a steer, let them do the same as all the other sexes wanting a drive.

Special categories do not foster equality, quite the opposite. 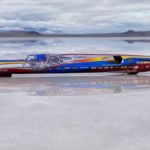