A five-year-old girl in Surin lost her left arm when her sweater got entangled in the back wheel of a motorcycle driven by her mother on Thursday evening.

Chalongkrung said he made the post to warn parents to be careful when driving motorcycles with their kids riding pillion.

He said the girl’s pink sweater got stuck in the wheel, which pulled in her arm before cutting it off.

He put the arm in ice and rushed the girl and the arm to Surin Hospital but it was too late to reattach the limb.

The girl was in a safe condition but remained under close watch by doctors. 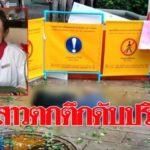