Everything was running perfect for Red Bull and Max Verstappen.

Verstappen and Red Bull teammate Daniel Ricciardo were dominating Friday’s practice sessions at the Mexican Grand Prix, posting laps ahead of Mercedes and Ferrari. Then Verstappen’s car shut down with a hydraulic problem late in the afternoon and his day ended early with him climbing out of the cockpit for a puzzled look at the engine.

It could be a worrying development if old reliability problems are going to crop up again at a race the Red Bull drivers are confident they can win. Ricciardo retired early from the U.S. Grand Prix last week with engine problems as Verstappen took second.

“We have a very good car at this circuit, good downforce and good mechanical grip,” said Verstappen, who shrugged off the late engine failure as a “small issue” heading into Saturday qualifying.

“We are not too concerned ahead of tomorrow,” Verstappen said. “The guys will investigate this evening but hopefully it is a quick fix.”

Red Bull team principle Christian Horner said the car should be able to be fixed without a starting grid penalty. Verstappen still has an allowable engine change this season.

Verstappen posted Friday’s fastest times despite the late engine failure. His best lap in the high altitude of the Autodromo Hermanos Rodriguez was 1 minute, 16.720 seconds, with Ricciardo 0.153 seconds behind.

The problem came as Verstappen approached the turn at the end of the track’s long straight. He avoided a crash by steering the car into the grassy runoff area and stopped short of the wall.

The Dutch driver won the Mexican Grand Prix last year and has called this week’s race Red Bull’s best chance to win over the final three races of the season. At 21 years old, he could become the youngest driver in F1 history to start from pole position if the car holds up in qualifying.

Red Bull certainly distanced itself from Mercedes and Ferrari for a day. The two teams battling for the season driver and constructor championships were nowhere near the top pace.

Mercedes’ Lewis Hamilton, who could secure the season championship if he finishes no lower than seventh, was fifth in the first practice and seventh in the second.

Ferrari’s Sebastian Vettel was fourth in the afternoon practice, 1.380 seconds behind Verstappen. Vettel started on the pole last year and must win Sunday if he wants to push the championship to the next race in Brazil.

Hamilton said the Mercedes team was “off” last week at the U.S. Grand Prix, where he finished third and teammate Valtteri Bottas was fifth. Hamilton had his own run off into the grass in the first turn.

Renault engines had an impressive run overall Friday. Outside of the Red Bull cars, Renault rivers Carlos Sainz and Nico Hulkenberg were third and fifth, respectively, in the afternoon.

“Today it was difficult to make the car work the right way,” Vettel said. “Everybody still has something to step up tomorrow, but we tried pretty much to go as fast as we can.”

Ricciardo said he expects Mercedes and Ferrari to jump back up toward the front Saturday.

“It seems with the altitude, everyone’s power seems to be brought together,” Ricciardo said. “I’m sure Ferrari and Mercedes will come on strong tomorrow. I hope they don’t. It could be a close six-way fight for pole.” 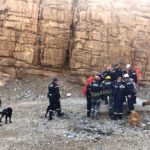