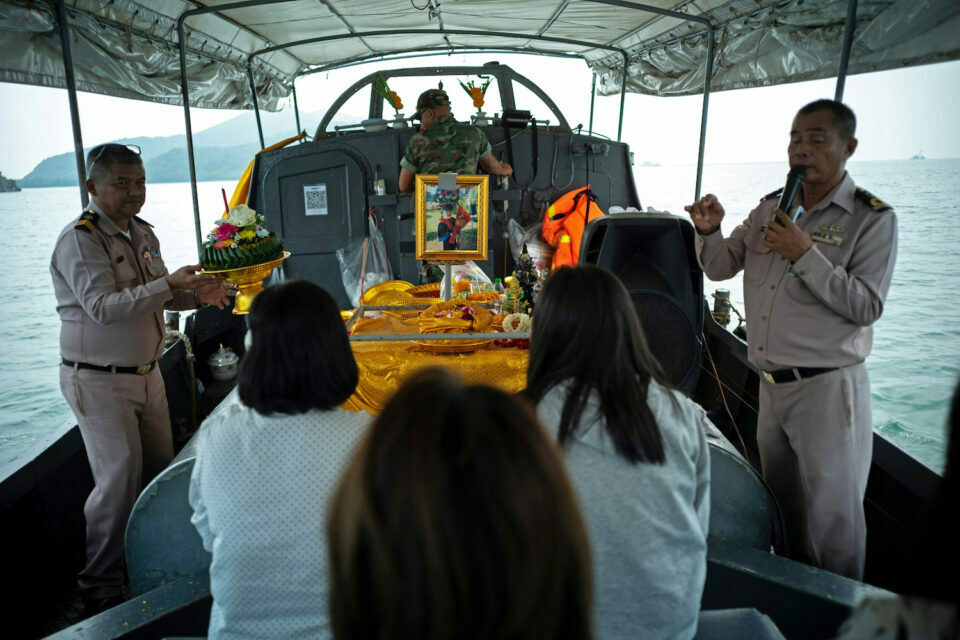 A boat bobbing on the Gulf of Thailand carried the ashes of four-year-old Pattanan Mumklang.

Nicknamed “Model”, the chubby-cheeked girl with a toothy smile had dreamed of seeing the sea and playing in its waves. Her grandmother had promised they would visit this year.

But on Oct 6, Model and many of her classmates were murdered at their nursery in Nong Bua Lamphu in northeastern Thailand by a former police officer, in the world’s deadliest killing of children in recent years.

Now, weeks later, her family travelled to the coast in Chon Buri to scatter her ashes.

“Finally, I can bring you here,” her 52-year-old grandmother Saowanee Donchot, who had been raising her, said through tears.

Model was among 36 people, 23 of them children, killed by an ex-cop wielding a knife and a gun during an hours-long rampage that only ended when he killed his girlfriend, her son and himself.

The massacre has plunged the tight-knit rural community of Uthai Sawan into shock and left dozens of families grappling with incomprehensible loss.

Model was among the oldest of the children killed last month, all aged between two and five.

She had a turbulent start in life. She was born in prison after her mother, Kanitha Koonthawee, was jailed on drug charges. Her father was also behind bars.

Her grandmother, rice farmer Saowanee, adopted her when she was eight months old, just as she was learning to stand, and the two quickly bonded. Saowanee remembers telling her, “You’re my daughter now”, as she was handed over.

“We were each other’s shadows,” she said. “We were together 24-7, apart from when she went to school.”

Model was a boisterous child, her grandmother said in an interview in their family home, a single-storey house on a quiet street flanked by banana trees and coconut palms. If she wasn’t getting her hands dirty playing in mud and sand, she was messing around with tools and plastic guns. She loved to play football.

Their home was filled with the girl’s laughter and defiant squeals.

“Those were the sounds of joy, I realise now,” Saowanee said. (Story continues below) 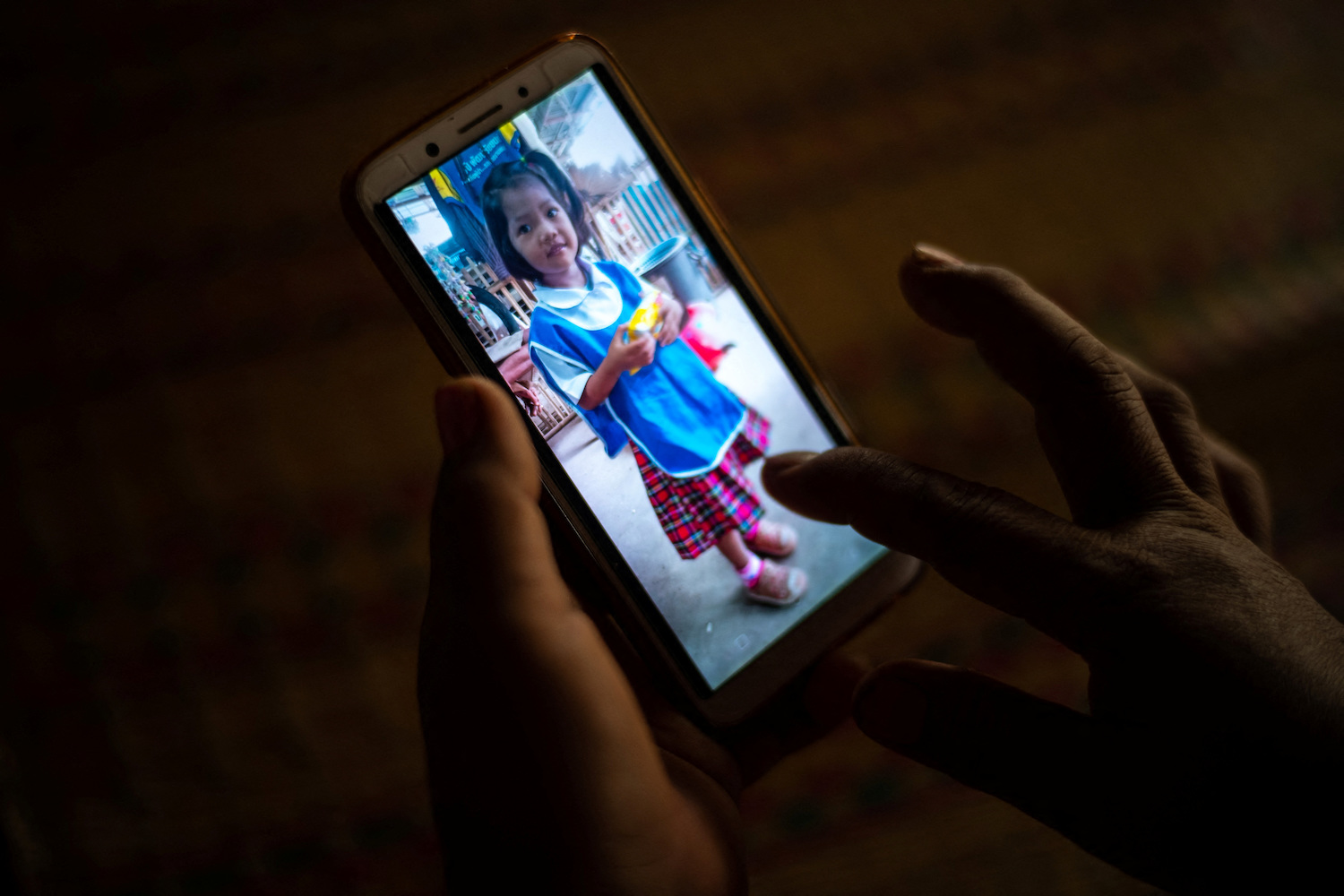 ‘Please don’t be my little girl’

On the morning of Oct 6, Saowanee dropped Model off at the nursery as usual. In the afternoon, employees of a government office next to the nursery came and asked if Model had been at school that morning. They told Saowanee to go there because there had been an attack.

On the drive there, she prayed, “Please don’t let it be my little girl.”

But when she asked officials at the scene, they were silent.

On her phone, she scrolled through photos taken at the nursery that day. The teachers, two of whom were also killed, sent daily updates to the parents and guardians about their children.

In one photo, Model sits cross-legged at a tiny desk in a blue bib and white shirt, in front of a wall plastered in rainbow stickers. She holds a pencil, intently focused on the page in front of her.

Model’s belongings — tiny sneakers adorned with cartoons, a stuffed Piglet toy, a pink backpack with pictures from the Disney movie Frozen — lay strewn about their house.

“I told myself, I need to be strong,” Saowanee said. “But how can I move on? What’s the purpose of living? Who am I living for?”

Kanitha, who was working close to the capital of Bangkok after her release from prison, has moved back to the family home.

Wracked with guilt over her absence from her daughter’s life, she asked, “Why didn’t I do better for her?” (Story continues below) 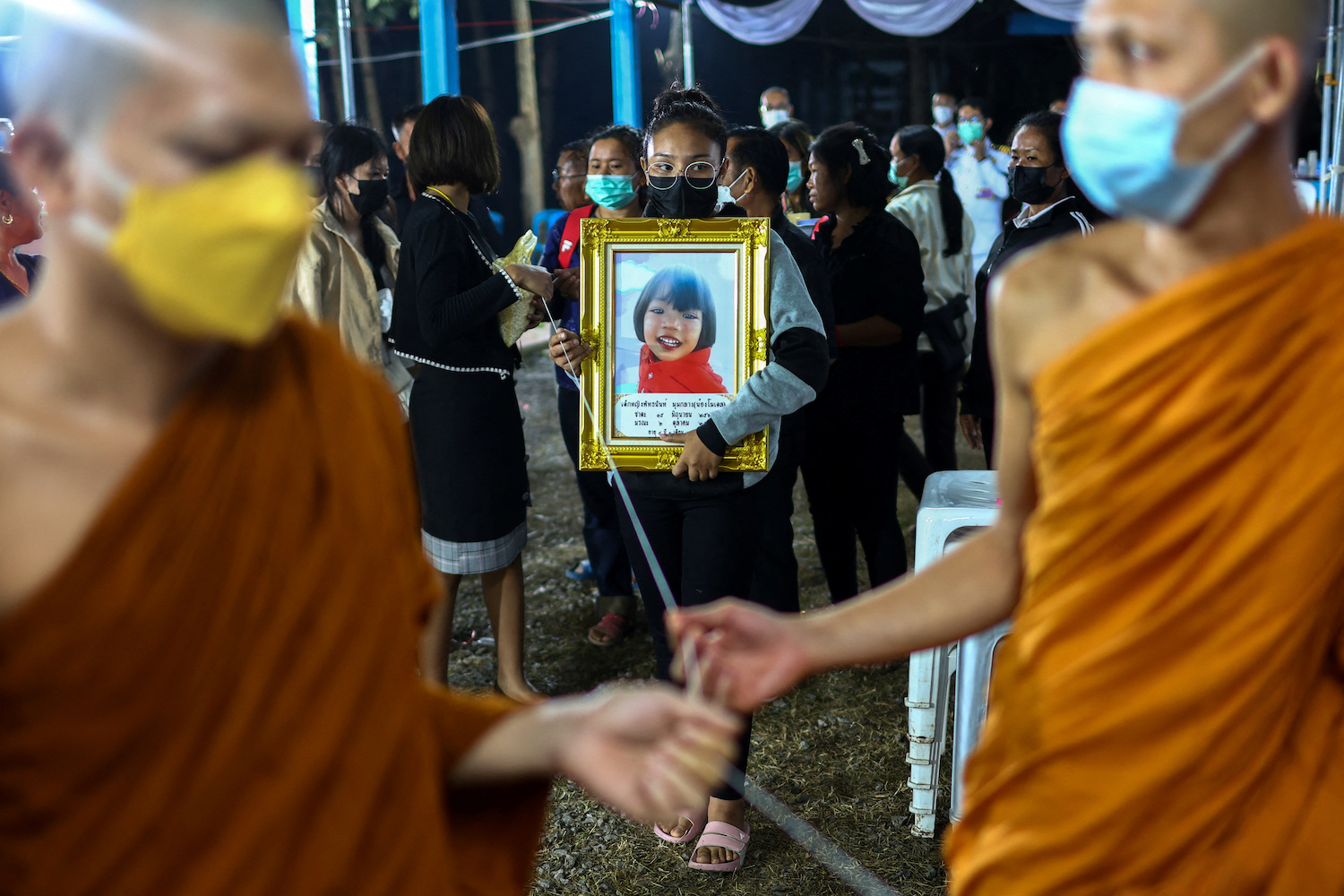 In late October, Saowanee, Kanitha and other relatives made the long journey by bus and plane to Chon Buri.

On the road, the family was quiet, but there was a sense of solace about being able to do something that Model had wanted.

Once on the boat, at a spot far from shore, the family unwrapped Model’s ashes and let them float away on the waves. From a golden bowl, they scattered orange blossoms. Pink rose petals floated on the water.

“If the next life is real, please come back to be my daughter again,” Kanitha said. 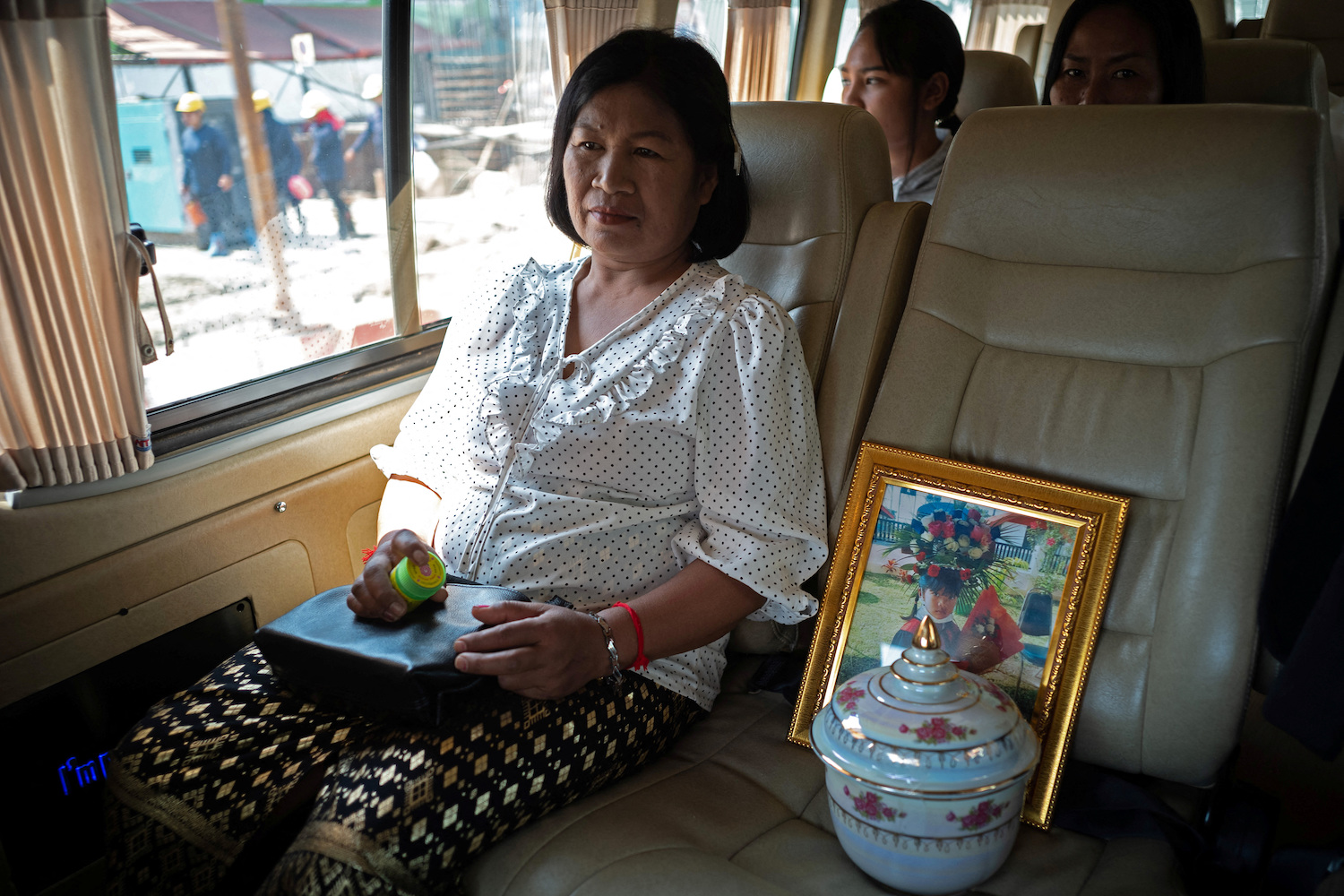 Saowanee Donchot sits next to the urn containing the ashes of her granddaughter as she travels with other family members to Chon Buri to scatter the ashes at sea. (Photo: Athit Perawongmetha, Reuters) 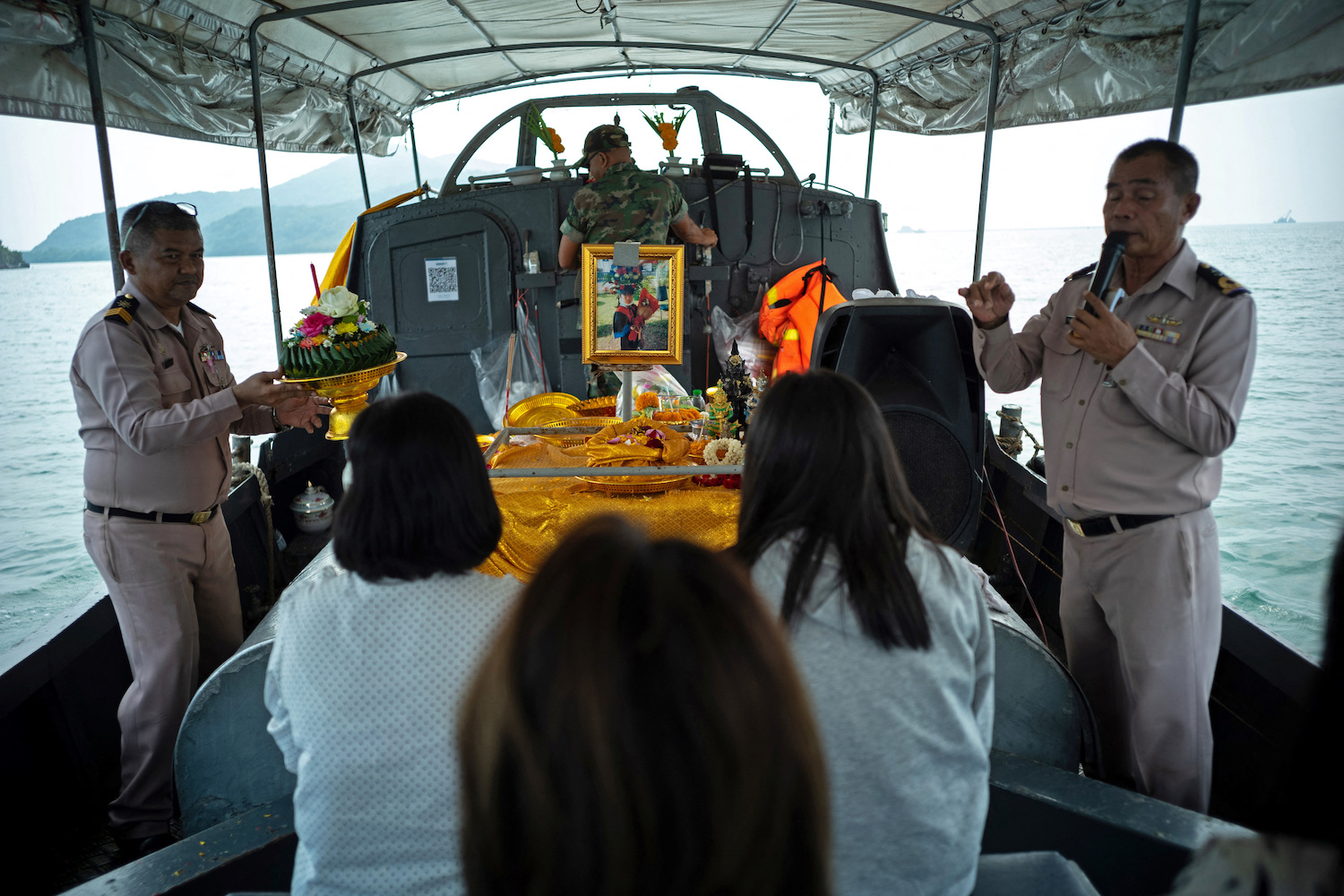 Royal Thai Navy personnel perform a ceremony before scattering the ashes of Pattanan Mumklang at the navy base in Sattahip. (Photo: Athit Perawongmetha, Reuters) 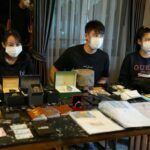