Korat woman Rescued: A woman was rescued early on Tuesday about nine hours after her head became stuck between iron bars in the gate of her Nakhon Ratchasima home.

Her Khong district neighbours spotted Aree Peklang, 48, in a sitting position with her head stuck in the gate at 4.45am and called Khong Hospital’s emergency unit to send help.

Rescuers used an iron cutter to cut a bar and removed Aree in about five minutes.

She was breathing faintly as her position made it difficult to breathe. The rescuers performed first aid and rushed Aree to hospital.

She said she stumbled and fell head-down and got stuck at 7pm on Monday night as she was about to enter the house.

Udon Thani woman hangs self ahead of cancer diagnosis 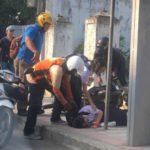 Biker faces charges for running into schoolgirl on Bangkok sidewalk