FIVE OFFICIALS from the Department of Special Investigation (DSI) will meet police next Friday at the Provincial Police Region 4 Office to answer questions about assistance provided to former teacher Jomsap Saenmuangkhot in her failed attempt to petition for a retrial in her hit-and-run conviction.

He was brought by police yesterday to court for an application for detention and was granted release on bail, for which he offered his civil servant position and an unspecified cash deposit. A witness who supported Jomsap, Thassanee Hanpayak, who on Wednesday met police to hear charges, was brought to court for a detention order and was released on Bt100,000 bail. Police also on Wednesday summoned Sert Roopsa-art to provide information as a witness for the third time.

Jomsap’s friend Suriya Nuancharoen had brought Sert to police, with the latter claiming he had been the driver in the 2005 crash, which killed an elderly cyclist. Another suspect, Sap Wapi, later claimed to have been the driver after it was disclosed that Sert did not know how to drive. The third interrogation was meant to uncover any information that might have been missed in the earlier two questioning sessions in January, police said.

In related development, Natchapol “Mark Pitbull” Supattana, a social network celebrity, went to see police yesterday to insist he had good intentions in raising funds to help Jomsap, and he had nothing to do with an alleged plot to deceive authorities. Natchapol claimed he had believed that Jomsap was innocent of the crash and hence raised Bt1 million in donations.

He added that he did not know what Jomsap, whom he had met only three times, spent the money on. After meeting with Natchapol at the Royal Thai Police head office in Bangkok, national police deputy chief Pol General Weerachai Songmetta said case investigators would check transactions to see whether the donations that Natchapol had given to Jomsap had been spent on paying false witnesses or fabricating evidence.  Source: Asia Nation 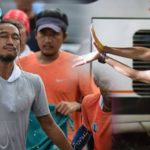