A 390-pound bodybuilder who goes by the name Iranian Hulk has announced he will make his mixed martial arts debut this year by taking on a Brazilian opponent.

Sajad Gharibi, who is also known as the Persian Hercules, stands at 6’2″ tall and weighs roughly as much as a killer whale calf.

He announced his intention to move into MMA on Instagram in January, when he threw down the gauntlet to anyone who was willing to step into the octagon with him.

And last week he revealed that he had accepted the challenge of a Brazilian rival, with the fight to take place before the end of the year.

‘So I’m finally accepting my first professional fight from a Brazilian fighter before 2020,’ he wrote on Instagram, where he has amassed nearly 450,000 followers.

Gharibi did not name his opponent, but some have speculated that it could be 29-year-old Romario dos Santos Alves, also known as the Brazilian Hulk.

Alves, who threatened to ‘tear off’ Gharibi’s head in an Instagram video last month, started training seriously in 2009 and currently weighs 229 pounds (104kg).

According to local media, he nearly lost an arm in 2013 due to synthol oil injections which caused a severe reaction.

The use of injected oil to enhance muscle appearance is common among bodybuilders despite the fact that synthol can cause pulmonary embolisms, nerve damage, infections and the formation of oil-filled ulcers in the muscle.

Over the last five years the Brazilian Hulk has reportedly changed his lifestyle and now trains healthily.

Gharibi, meanwhile, has a cult following on social media where he posts about what he does best – weightlifting.

His Instagram page displays an array of topless photos of himself and pictures of him going about his day to day life. He often takes pictures with objects that look incredibly small when held next to him – such as can of Fanta orange.

In another photograph, he wraps his enormous arm around a normal sized friend.

He can lift around than 180kg, which is almost as much as his body weight, and competes in the powerlifting category of competitions.

He has also participated in bodybuilding competitions representing his country.

If the two Hulks do square off in the ring, the Iranian will have a significant size advantage – some 160 pounds and 6 inches in height.

But that does not necessarily mean he will triumph if the two do meet in the ring.

Larger contestants can often be less agile and tire more easily than their lighter opponents. 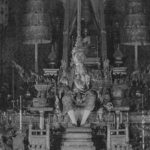