Unless you have been hiding under a rock for the last few days, or of course don’t use Facebook, you may have noticed all the black and white profile pics.

A large number of users of the social media have turned the colours of their profiles into black and white or display a black ribbon to show respects for the late King Bhumibol Adulyadej as royal cremation ceremonies will be held in late October.

Many websites have allowed their users to create black and white profiles by themselves. Facebook, for one, has added a black ribbon in the Profile Pic Frames feature for users to put their personal profiles on display to show respects for the late King.

Oct Oct 13, 2016, the Thai people sufferred a great loss when His Majesty King Bhumibol Adulyadej passed away at Siriraj Hospital. After that the Thai people have shown respects for the late King in various forms.

Since then, a large number of people have continued to flock to Sanam Luang before proceeding to the Grand Palace to give their last respects to the late King.

The Royal Household Bureau has extended the period for the people to do so from Sept 30 until midnight of Oct 5.

The royal cremation ceremonies will be held between Oct 25-29.

There’ll be no confusion in these toilets 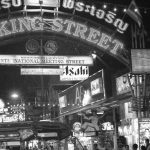