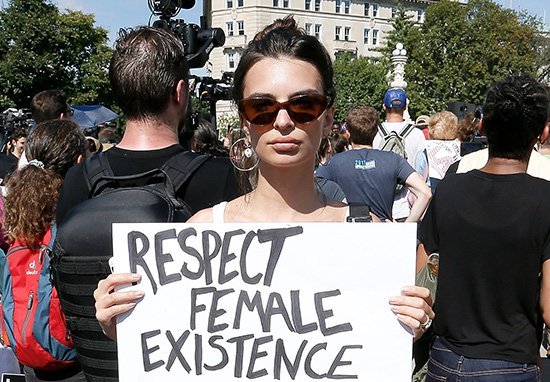 Emily Ratajkowski has responded after trolls mocked her for going braless at a protest.

In October 2018, the 27-year-old model and actor attended a protest against the Supreme Court nomination of Judge Brett Kavanaugh following allegations of sexual misconduct.

Accompanied by her I Feel Pretty co-star Amy Schumer at a US Senate building in Washington DC., Ratajkowski held aloft a placard which read, ‘Respect female existence or expect our resistance’.

However, despite Ratajkowski hoping to make a serious statement about the issue of sexual assault, a large number of people were more focused on the fact that she hadn’t been wearing a bra during the protest.

Today I was arrested protesting the Supreme Court nomination of Brett Kavanaugh, a man who has been accused by multiple women of sexual assault. Men who hurt women can no longer be placed in positions of power. Kavanaugh’s confirmation as a Justice of the Supreme Court of the United States is a message to women in this country that they do not matter. I demand a government that acknowledges, respects and supports women as much as it does men.

Plenty of human boobies resolved to comment on Ratajkowski’s Instagram pics, advising her to put a bra on and even describing her lack of bra as being ‘disgusting’.

Says a woman whose not always wearing bra wherever she goes. Dress properly! You want respect? Respect yourself first by wearing properly! Idiots! You all just want attention.

Speaking with Stellar, Ratajkowski expressed her bewilderment at the attention given to her choice to go braless:

I was. I knew being there would be important and I knew some people would find it controversial, but I never expected anyone to talk about why I wasn’t wearing a bra under my tank top.

It was 32 degrees, I was marching through D.C. in jeans; my outfit seemed completely normal to me. And I was there making a political point. Why would people focus on what I was wearing?

Ratajokowsi, who had been wearing a simple white tank top and jeans at the time, was arrested alongside Schumer, 37, for participating in the protest.

The moment of their arrest was captured and shared on Twitter, with footage showing Schumer appearing to verbally agree to the arrest.

I can’t believe I have to do this @emrata but here’s video if you and @amyschumer verbally agreeing to be “arrested” pic.twitter.com/xlKSy1sZ4b

Schumer later took to Instagram to defend Ratajkowski against the self-appointed bra police, revealing how she had also refrained from wearing a bra that day:

People are trolling @emrata for not wearing a bra while she got arrested. Well for starters I wasn’t wearing a bra either. In the “what to wear when being detained for 4 hours on an 87 degree day after a 2 hour march” handbook. Bras aren’t recommended.

Emily sacrificed herself fighting to protect women’s rights to choose what they do with their own bodies. How about we show her the same courtesy and direct some of that toxic energy to the people who deserve it.

Your comments are synonymous with saying what a woman wears insights bad behavior. Have you written three furious tweets to, I don’t know maybe, someone who sexually assaulted someone? I’m gonna guess no. You reserve your rage for the victims or a beautiful woman you’re threatened by.