Incredible rare footage has emerged of peaceful contact between Indian people and people from the Sentinelese tribe that recently killed an American missionary.

The video dates back to 1991 when Trilokinath Pandit, a director of the Anthropological Survey of India, and his colleagues visited the island in the Indian Ocean on 4 January.

The footage is a stark contrast to other videos from the island – Survival International once posted a video showing the tribe shooting arrows towards people approaching the island and it’s been confirmed that the Indian visits to the island ceased in 1997.

Recently, an American missionary, called John Allen Chau travelled to North Sentinel Island – one of the world’s most isolated islands – with the intention of converting the people who live there to Christianity.

However, after the 27-year-old paid a fisherman to help him get across to the island, it became apparent he was killed by the locals as soon as he arrived there.

The indigenous people are protected by law and it is illegal to go over to the island.

“Our thoughts and prayers go out to both John’s family and friends. A full investigation must be launched in this this murder and those responsible must be brought to justice.”

The tribe – thought to be made up of around 150 people – are generally left alone by the government and, due to their isolation, they are highly susceptible to disease and infection because they haven’t developed immunity. 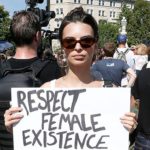 Emily Ratajkowski Responds After Being Trolled For Going Braless At Protest

OAP Conned Out Of £20,000 By Fake Girlfriend Posing As Adult Star