It’s almost Chinese New Year, but unlike previous years here in Pattaya, there aren’t many Chinese around to celebrate. Why, you may be asking, well, it all started with the crackdown on “zero dollar” package tours back in September.

Between 2012 and 2016, the number of Chinese tourists coming into top Thailand trebled, eventually making up over a third of Thailand’s tourist numbers. Then the infamous crackdown happened in September, and numbers started spiraling rapidly back down in the opposite direction.

One company in particular, The D-Land Holiday Co. Ltd, who caters for Chinese hotel bookings, reported a total of 300 bookings this year, down well over 50% on the 800 bookings taken last year. “It’s down to the crackdown” said the owner, Mr. Ruengdet Amorndetphakdee.

Central Plaza Hotel also reported similar drops in customers this year, whilst Tristar Floating Restaurant, where Chinese customers represent over 90% of its customers are currently running only 1 of their 6 cruise ships.

The Thai authorities are still feeling ambitious for 2017, hoping that Chinese tourist numbers will reach 9 million by the end of the year, whilst expecting Chinese revenue to hit the 500 million Baht mark.

Just recently, Thai authorities released a report predicting an 8.5% rise in total tourist revenue for 2017, which will mean total revenue of around $50 billion. That would make it more than double the economic growth rate forecast. 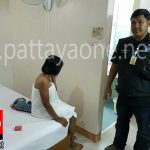