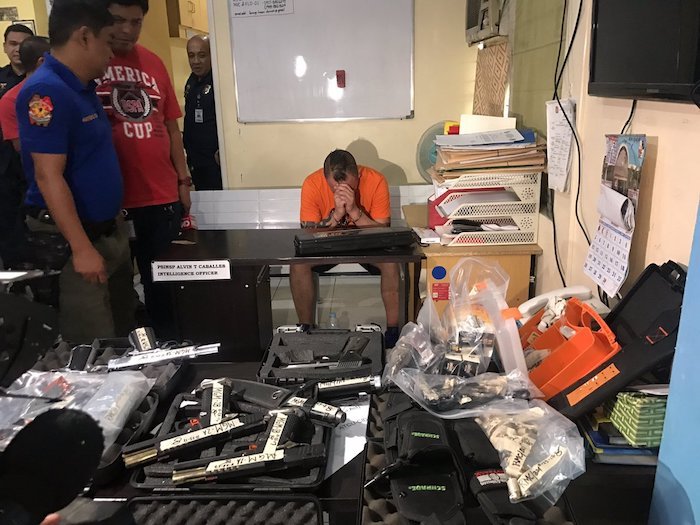 A British businessman who lived a ‘’lavish lifestyle’’ in the Philippines holds his head in his hands after being allegedly caught with a huge haul of weapons.

Matthew George Marney, 38, had been living with his Filipino girlfriend while running a property business when local police were tipped off that he was hoarding a huge stash of guns.

Officers raided the entrepreneur’s home last month on November 23 where they arrested Marney and Filipino Rommel Castillo, 45, who worked as his driver.

They said Marney had ”two SUVs and a modified Subaru race car’’ worth 90,000GBP while living in an upmarket part of the city.

Police unpacked bags at the local station in Manila where Marney was pictured in an orange shirt looking devastated as the haul of five .45 caliber pistols, 11 magazines, 25 bullets, 14 bladed weapons, five brass knuckles, a stun gun, a slingshot other accessories were laid out on a table before him.

Superintendent Roque Merdegia, head of the country’s Criminal Investigation and Detection Group (CIDG) Anti-Transnational Crime Unit which carried out the raid, said they received a tip from an informant about the presence of armed men in the expensive Pasig City district of the capital.

Merdegia said they will coordinate with the British Embassy to obtain more information on Marney, who refused to answer questions during the public arrest.

He said: ‘’We will coordinate with the British embassy about the background of the suspect. If he has any record and involvement in illegal transactions abroad.’’

Merdegia said it was ‘’alarming’’ to find a foreigner carrying so many firearms in the Philippines ” considering that there is martial law in Mindanao’’.

He added: ”We got suspicious after we discovered that the British national has no apparent means of income except an online market company allegedly registered to his fiancée.

”He really has a lavish life-style here. He owned two SUVs and a modified Subaru race car worth P6 million.”

Police said the warrant for the arrest had been issued by the Department of Justice for violating the Republic Act 10591 or the Comprehensive Firearms Law and Ammunition.

A spokesman said today that the case was still being processed and evidence being gathered.

According to an online profile, Marney ”has been providing real estate and relocation services to British nationals and expats since 2010’’.

Mother ‘stabbed herself and two children after splitting up with husband’ 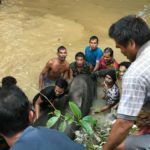