It’s been less than six months since 12 boys and their football coach became trapped in a Tham Luang cave system in northern Thailand’s Chiang Rai province.

The story of their 17-day ordeal captivated the media, the world, and even Elon Musk. But now that the rescue divers, Thai Navy SEALs, volunteers, and TV cameras have all gone home, foreign tourists keep turning up—transforming the spot into a booming tourist attraction that’s a popular setting for Instagram posts.

A recent Guardian story quotes a vendor who trades near the entrance of the cave, where more than 100 stalls have sprung up selling their wares to visitors. “People tried to make Tham Luang a tourist attraction before, many times, but it never became popular. Now it is famous all over the world because of the boys saved from the cave. We are not just happy because of the money from tourists. We are also very proud people want to travel here to see our beautiful park. It is an honor for us,” she said.

Tourists are reportedly not permitted to enter the cave where the rescue happened, but they are free to explore three other caves on the site. A museum is also being built to commemorate the rescue. One tourist even posted a picture at the site, claiming to be posing with two of the boys who had been trapped in the cave.

Of course, Tham Luang is hardly the first location of a near disaster (or actual disaster) to lure in tourists. Many of the world’s most famous or highly visited tourists attractions—from Pompeii to the 9/11 Ground Zero site in New York to any number of war memorials—are situated where terrible things happened.

But the speed at which the out-of-the-way Tham Luang cave has become a go-to spot for foreigners seems notable. Perhaps thanks to the digital era—where people watched the spectacle of the Thai cave rescue unfold on their phones and on social media as much as they did on their televisions—it feels natural to bring the experience full circle by taking a selfie at the site. And for those who are intrigued but can’t make the visit themselves, there’s a forthcoming movie to look forward to. 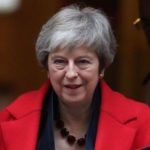 Britain worse off under any Brexit: Treasury