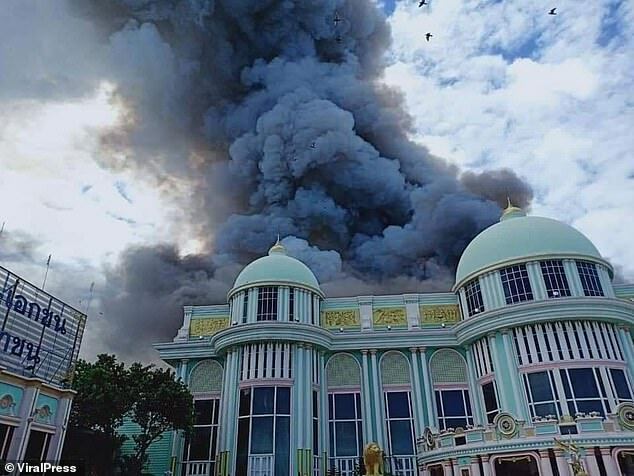 A billionaire’s $64m palace has burned to the ground in Thailand on the first day it re-opened after the coronavirus locked down.

Flames ripped through the Baan Sukhawadee mansion, near the tourist resort of Pattaya in eastern Thailand, this morning.

Staff at the sprawling sea-front palace – packed with priceless oriental antiques and relics – say they heard ‘an explosion’ and noticed flames shortly after 10am.

The inferno engulfed the top of the building as clouds of thick black smoke billowed into the sky, visible for miles around.

Fire engines scrambled to the scene but have been unable to control the spread of the blaze.

Firemen were still battling the flames hours later and continue to trawl through the smoke-charred remains.

District Sheriff Amnat Charoensri said there were fears that the palace could collapse because the flames had weakened and cracked its structure.

He said: ‘Fire crews could not control the flames. They continued to spread through the building. It accelerated so quickly.’

The palace was built in 2000 by Thai billionaire Dr. Panya Chotitawan – who owns one of the country’s largest frozen chicken exporters.

It is used for both Buddhist religious ceremonies and is a major tourist attraction.

Sukhawadee, meaning ‘paradise’, is famed for its luxury complex of European-style palaces and gardens housing an abundance of religious images of Budha, and stands in contrast to the quiet fishing village of Pattaya.

Building caretaker Wichian Chamsai said his colleagues heard an loud explosion before the fire broke out.

‘I was working in the building when one of my colleagues shouted to me telling that he heard an explosion.

‘Then I also saw a spark from the back of the building before we evacuated as quickly as we could. It sounded like an electrical problem caused the fire.’

Police have closed the area and are waiting for the inferno to be brought under control before they begin investigations.

Van driver arrested after he kicked lottery seller in the face