A factory worker was arrested early Tuesday after he allegedly stabbed a former muay thai teacher to death in Bangkok’s Bangkoy Yai district.

Yutthana Sophakhan, 26, was arrested shortly after Bangkok Yai police were alerted at 12.45am. The victim, Chayapol Boonhy, 50, a former teacher at a muay thai (Thai boxing) camp in Si Sa Ket, had been stabbed 11 times. He had been working as a taxi motorcyclist on Soi Phetkasem 4. Police said Yutthana stabbed Chayapol following a dispute while they were drinking with friends from Monday night until early on Tuesday. SC – EP 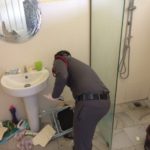