Home » The beautiful thief who stole phones at night.

This story was told by Facebook user AnnPhone AnnLenoir who is a phone shop owner in a mall located in Bangkok. She posted the security footage of a young beautiful woman who took the opportunity to break into over 15 phone shops after the mall was closed for the day. Over 100,000 THB worth of phones were stolen.

Ann who is the owner of the Facebook account stated that the thief stole the phones on December 9 from 10:30 to 12:30 at night. The thief chose to steal the phones at night as it was after the mall closed down and there was no one at the mall to see or stop her. Ann didn’t realize that the phones were gone until the 10th of December which is the next day when she came to open her shop as usual. 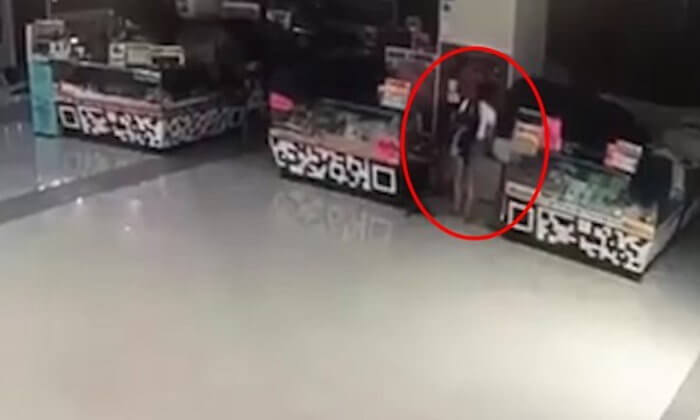 When she arrived, her shop was torn apart and the display shelves where the phones were stored was forced open, the locks were broken into pieces. Only one phone was stolen from Ann’s shop but there are at least 10 stolen phones in total from the other phone shops. Ann also stated that many other items in her shop were damaged due to the beautiful thief’s attempt to break in.

As soon as Ann discovered what happened, she went to the Phasi Charoen Police Station and reported the incident. She then used the police report to ask permission from the mall to see the security footage from the previous night. The women appeared to be with a man who kept watch as she went in and stole the phones.

Currently, it is estimated that the couple were pretending to come to watch a late night movie at the cinema, where only the cinema area was accessible within such time periods as the rest of the mall was shut down for the day. This is the main reason why the security team was not aware of the theft that was going on. Ann further stated that the mall will be increasing the security at night time even after the mall is closed.

NO BAIL FOR BANGKOK COP THAT SHOT FRENCHMAN