A college teacher, who was allegedly threatened by a gun-wielding and apparently drunk police sergeant at a convenience store in Chaiyaphum’s Muang district on Monday morning, has vowed that she and two others, who claim they were assaulted by the same policeman, will press charges.

Teacher Siriporn Khanthongkham on Tuesday presented a video clip recorded by her car’s dashboard camera to back her allegation about the incident at 7am on Monday. The dashboard camera clip was in line with footage from the store’s camera, which went viral on Thai social media on Monday.Many netizens called for justice for the alleged victims of the officer, who was later identified as Pol Sergeant Aricha Janthasen from Muang Chaiyaphum Police Station. Siriporn said that the plain-clothes policeman, who she didn’t know, came out of the store, pointed a gun at her and demanded that she get out of her car. As she stepped out, the officer spoke incoherently and then shot the gun once into the ground.

She asked him what he wanted, and he told her that he had nobody in his life and his family had abandoned him. She persuaded the policeman that she wanted to go into the store to buy water.He then allegedly stared at the store’s CCTV camera and coldly said: “If I shot you dead, will the camera capture that?” Fearing for her life, the teacher didn’t say anything. Another person arrived at the scene, diverting the policeman’s attention, so Siriporn left. “Before I went away, he handed me Bt100 to buy water to drink,” she said. Siriporn said two other people were allegedly assaulted by this officer at the same venue. Saying that Muang Chaiyaphum precinct superintendent Pol Colonel Pongpat Jaengmeunwai had promised to proceed on the case against the officer, she said she would meet police on May 9 to see if any more charges could be filed
The police’s “SocialMediaRoyalThaiPolice” Facebook page, which confirmed the accused police’s identity, also quoted Pongpat as saying that Aricha was in custody after he had run his vehicle off the road following the alleged threats outside the convenience store. Pongpat also said that police had seized a pistol, three bullets and a spent cartridge from Aricha and confirmed that the sergeant was currently facing legal action.The Nation 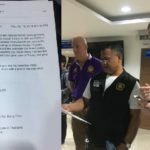 Exclusive Interview with Youtuber: The truth, the whole truth, and nothing but the truth!