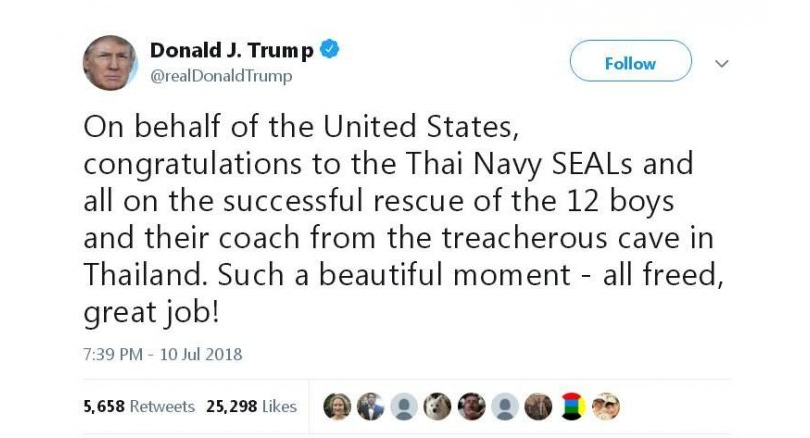 Donald Trump’s tweets in response to the rescue of 12 children from a Chiang Rai cave have drawn scorn, with netizens slamming the US president for being “ignorant to domestically detained immigrant children”.

Trump’s tweet on Tuesday at 7.39 pm, Thai time, says: “On behalf of the United States, congratulations to the Thai Navy SEALs and all on the successful rescue of the 12 boys and their coach from the treacherous cave in Thailand. Such a beautiful moment – all freed, great job!”

Despite the positive tone, followers of Trump’s personal account @realDonaldTrump raged at what they said was hypocrisy given ongoing immigrant detentions in four US states bordering Mexico.

A crackdown on illegal immigration at the US border has stirred controversy around the world for a detention policy of separating children from their immigrating parents without measures in place to eventually reunite them. A request by the Trump administration to allow long-term detention of illegal immigrant children was rejected by a federal judge on Monday.

“Great news!! Congrats to all of the Thai parents who have been reunited with their children,” tweeted Holly Figueroa O’Reilly, a Trump critic who once won a legal case over the president blocking her on Twitter.

“Time for you to do the same at our border.” O’Reilly added.

On Sunday, Trump drew an avalanche of criticism when he tweeted, “The U.S. is working very closely with the Government of Thailand to help get all of the children out of the cave and to safety. Very brave and talented people!” Netizens quickly accused the famously publicity-hungry president of exploiting the drama, calling him a “PR freerider” cashing in on US-based tech tycoon Elon Musk’s vows to assist with the rescue operation in Chiang Rai.