The toll in record rains that have devastated parts of Japan has risen to 179, the government’s top spokesman said Wednesday.

Search-and-rescue operations are continuing after floods and landslides caused by the rains, and local media said several dozen people were still missing in Japan’s deadliest weather-related disaster in over three decades. 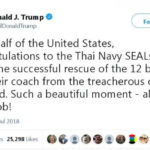 After Trump hails release of Thai kids, netizens ask: what about immigrant children?