Home » Video: Man is beaten up by his TWO WIVES

An Indian man has been beaten by his two wives after trying to illegally marry a third woman.

S.Aravind, known as Dinesh, was first married in 2016 but decided to secretly marry a second woman earlier this year.

It was reported by local media that Dinesh had physically abused both of his wives, causing both of them to return to live with their parents.

When they found out about each other and Dinesh’s plan to marry a third woman they decided to take action.

Video from the southern Indian state of Tamil Nadu shows one of Dinesh’s wives running toward the man and beating him with a handheld object.

Moments later, his other wife gets in on the act and also starts hitting Dinesh.

The bigamist was then arrested at the end of the incident, according to Press Trust of India.

Polygamy was outlawed in India in 1956 for all of it Hindu citizens, however, Muslims are still legally allowed to have multiple wives.

It is an offence that is punishable by jail time in India. 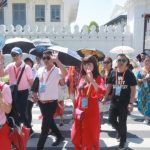