Home » Unlucky grandfather, 90, accidentally eats a quart of PAINT after mistaking it for yogurt

A larger than life nonagenarian became a viral sensation on Friday after his granddaughter shared that he had accidentally mistaken a quart of paint for yogurt.

She also included a photo of the half-empty paint can.

‘Sooo my grandpa ate half a quart of paint today thinking it was yogurt,’ she said in the Friday post that has garnered more than 333,000 likes on Twitter.

The New York resident would later post a screengrab showing a video chat between her and Bobby, where she said that ‘his stomach’s completely unfazed.’

‘When I say he loves yogurt, he LIVES for yogurt,’ Stein explained to the DailyMail.com. ‘My mom buys at least 7 quarts of vanilla Danon yogurt a week.’

Stein’s comment section under the post was inundated with various flavors people assumed the vibrant man thought he was eating.

Mint chocolate chip and pistachio – or painstachio as it was referred to repeatedly on Twitter – were the two flavors that were the most commonly mentioned. 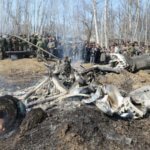 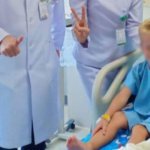 Boy attacked by dogs thanks King, PM after release from hospital