Flights are cancelled as Pakistan shuts its airspace – as the conflict between the two nuclear-armed rivals in Kashmir escalates.

Pakistan says it has shot down two Indian warplanes over Kashmir and captured two of the pilots in a major escalation of the conflict in the disputed territory.

An army spokesman said the country’s air force shot down the jets after they crossed the boundary between the two nuclear rivals in the region.

Major General Asif Ghafoor said one plane went down in Indian-controlled Kashmir and another crashed on its own territory where Pakistani troops on the ground detained the pilots.

He said one of the Indians was injured was being treated in a military hospital and said the other was in custody.

Maj Gen Ghafoor said the pair “are being treated well” and did not say if they would be allowed to return home.

It comes a day after Pakistan threatened India with retaliation after its rival launched an airstrike on a suspected extremist training camp in the Pakistan-controlled part of Kashmir. 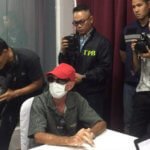 Unlucky grandfather, 90, accidentally eats a quart of PAINT after mistaking it for yogurt