Only four months into the New Year, 50 lives have already been lost due to knife and gun crime in the UK capital.
Leaked Home Office documents undermine Amber Rudd’s claim that police cuts were not to blame for increase in violent offending
Government cuts to the police “may have encouraged” violent offenders and have “likely contributed” to a rise in serious violent crime, leaked Home Office documents have revealed.
The documents cast doubt on claims by the home secretary, Amber Rudd, on Sunday that cuts to the police were not to blame for rising violence.
The Home Office said it would not comment on leaked documents.
Rudd will on Monday launch a strategy aimed at tackling serious violent crime, which officials and ministers have been working on for months. The launch comes after a week of shooting and stabbing deaths pushed the homicide rate in London to more than 50 lives lost this year.
The home secretary believes the strategy will mark a change in the approach to tackling serious violence, placing an equal emphasis on prevention and diverting youngsters from violence, as well as on strong law enforcement.
But the row over funding for the police threatens to overshadow the government’s new anti-violence strategy. Since the Conservatives came to power in 2010 police budgets have been cut, and officer numbers have fallen by more than 20,000. Labour and the police have claimed funding reductions have jeopardised public safety.
Home Office statistics show the number of police officers fell from 143,734 in March 2010 to 123,142 in March 2017.
Figures released in November showed a 20% annual rise in gun, knife and serious violent crime across England and Wales, even as the crime survey estimated there had been a 9% overall drop in crime. The Home Office said “traditional crime” nationwide had dropped by almost 40% since 2010.
As part of the preparations for the new strategy, which will include tougher powers to seize acid from people who cannot provide a reason for carrying it, and a crackdown on so-called zombie knives, officials in February prepared a document on the factors behind the rise in violent crime, marked as “official – sensitive”.
The document is entitled Serious violence; latest evidence on the drivers. A section on police resources says: “Since 2012/3, weighted crime demand on the police has risen, largely due to growth in recorded sex offences. At the same time officers’ numbers have fallen by 5% since 2014.
“So resources dedicated to serious violence have come under pressure and charge rates have dropped. This may have encouraged offenders. “[It is] unlikely to be the factor that triggered the shift in serious violence, but may be an underlying driver that has allowed the rise to continue.” A highlighted box emphasises that point: “Not the main driver but has likely contributed.”
Another section, entitled Implications for strategy, says: “The implications are challenging. There is good evidence that increasing resources dedicated to targeting hot-spots and prolific offenders can be effective, but there are several competing demands for any additional resource.”
The document also says that it was unlikely that “lack of deterrence” was the catalyst for the rise in serious violence. “Forces with the biggest falls in police numbers are not seeing the biggest rises in serious violence.”

Writing before the launch of her strategy to counter violence, Rudd said in a Sunday Telegraph article: “While I understand that police are facing emerging threats and new pressures – leading us to increase total investment in policing – the evidence does not bear out claims that resources are to blame for rising violence.
“In the early [90s], when serious violent crimes were at their highest, police numbers were rising. In 2008, when knife crime was far greater than the lows we saw in 2013-14, police numbers were close to the highest we’d seen in decades.”
Diane Abbott, the shadow home secretary, said: “The government’s own analysis seems to suggest that cuts to police officer numbers have had an effect in encouraging violent offences. If true this blows apart the Tories’ repeated claims that their cuts have had no effect.”
Labour has long believed that Conservative cuts to police budgets and the consequent fall in officer numbers is a vulnerability for the government.
The Labour leader, Jeremy Corbyn, will announce he is to preside over a roundtable of police officers, violent crime victims and experts as he launches his party’s local election campaign and will say: “Over the last eight years the Conservative government has decimated local services, the core services that are an essential part of holding our communities together.
“You simply cannot maintain community cohesion when you slash funding to the police service and cut the number of officers on our streets by 21,000.”
Launching the raft of plans aimed at reversing rising violent crime, Rudd will say: “This strategy represents a real step-change in the way we think about and respond to these personal tragedies, these gruesome violent crimes which dominate the front pages of our newspapers with seemingly depressing regularity.
“A crucial part of our approach will be focusing on and investing more in prevention and early intervention.
“We need to engage with our young people early and to provide the incentives and credible alternatives that will prevent them from being drawn into crime in the first place.”
Rudd will not follow the example of initiatives in Scotland, which treated rising violence as a “public health” issue, but borrow some of what was learnt from it.
The research underpinning the strategy found that half the rise in robbery, knife and gun crime can be explained by improvements in police recording.
The strategy identifies rising crack cocaine use as a “key driver” behind rising violence, and also for fuelling urban crime gangs moving into rural areas to sell drugs, known as “county lines”.
Between 2014-15 and 2016-17, killings where either the victim or suspect were involved in using or dealing illegal drugs increased from 50% to 57%, according to Home Office figures. In addition, there has been a 14% rise people seeking treatment for crack cocaine between 2015/16 and 2016/17. More pressure will be put on social media companies to take down content glamorising or celebrating violence or perpetuating gang feuds, but there are no plans for legislation.
The new serious violence strategy will not involve ministers reversing their position on stop and search, contrary to some reports, officials said.
The spate of shooting and stabbing deaths in London last week, abated over the weekend, with no more reported. Police chiefs ordered 300 extra officers on to the streets, but that is at best a short-term measure.
The Met commissioner, Cressida Dick, has warned her force will struggle with the additional cuts it has to make, as police numbers across the capital are predicted to fall to 28,000 if funding is further squeezed. She spoke in October of the need to find hundreds of millions of pounds worth of savings on top of the £600m of cuts the Met had already made: “I find it incredible that anybody would think that over the next four or five years we should lose that much extra out of our budget.”
In his last speech as incumbent in February 2017, Dick’s predecessor Sir Bernard (now Lord) Hogan-Howe said financial pressures put the police under pressure and “there are some warning lights flashing”. NG – EP

Many dead from bootleg alcohol 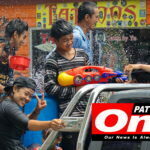