Home » Two monks seen fighting on the roadside in Myanmar

These two Buddhist monks seem to have forgotten some of their teachings.

The angry pair of were seen getting into a fight after one hit the other – with an umbrella.

The two men had just got off a bus as they walked down a road in Yangon, Myanmar.

As they walk along arguing, one of monks uses his brolly to whack the other monk in the back.

Their maroon coloured robes – the colour used by monks in the former Birtish colony – then get torn off as the pair grapple on the roadside.

Onlooker Myat Kyaw who recorded the clip said: ‘’Think before you do something. Think about how it makes the religion and the people look.

‘’There’s evidence of them behaving badly so nobody can hide it. These monks should be ashamed of what they have done.”

Despite the clip going viral in Myanmar and the two monks being disciplined, it’s still not clear what started the argument. 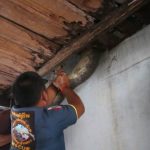 Monitor lizard bites dog then hides in the floorboards 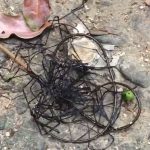